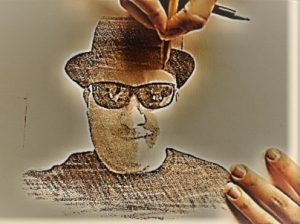 Tell us about yourself and how many books you have written.
I’m a new writer. I currently am finishing a series of action, adventure pulp short stories about a secret agent duo – Martin & James. Think Dick Tracy meets Batman and Robin (like the 60’s TV show but not as much corniness). I have plans for several series after this, including a superhero group.

What is the name of your latest book and what inspired it?
The Martin & James series had a couple inspirations. My first book idea, I wanted to release it as a series of short stories. I modeled this after the Conan stories by Robert E. Howard. He wrote them and they were printed in magazines like Amazing Stories, but they weren’t one story and they weren’t released in chronological order. That’s what I wanted, but I realized that the story idea I had needed a novel, not short stories.
Then my stepson told me about a dream he had and I turned it into a short story with a couple agents, one being modeled after him. This turned into another story based on another of his dreams – and the rest just happened. Now I am finishing the fifth story and have several more planned.

Do you have any unusual writing habits?
I don’t think so. I like to get up and write early in the morning, so my wife would say that’s unusual.

What authors, or books have influenced you?
Michael Crichton, Stephen King, the Dragonlance series, Spider-man comics, and obviously Conan stories.

What are you working on now?
I am finishing the Martin & James series, at least a collection for book 1. Then I will be working on a superhero book – The Vindicators. I have their origin stories and an idea for the main story. I have an outline for a couple books with Melvin the redneck trucker and his paranormal adventures. Then there is the Liza Jane books. These I have been working on and want to make as perfect as I can. I have a three book series outlined for this and most of book 1 done.

What is your best method or website when it comes to promoting your books?
I am still working on that. I’m testing some and seeing how things work out.

What is the best advice you have ever heard?
See above – Write.

What are you reading now?
I just finished a Jeff Strand book. Not in the middle of anything big. Reading some short stories in the magazine Deep Magic.

What’s next for you as a writer?
To keep writing and catch up to all the stories in my head.

If you were going to be stranded on a desert island and allowed to take 3 or 4 books with you what books would you bring?
Dragonlance, Jurassic Park, The Shining