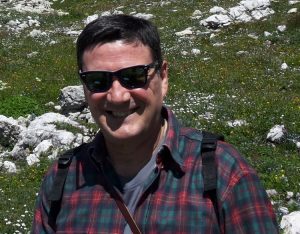 Tell us about yourself and how many books you have written.
I was born in one of the most beautiful places in the Mediterranean, the island of Maddalena, on November 13, 1950. My mother is an American citizen from Philadelphia, Pennsylvania—although her family was originally from Liguria in northwest Italy—while my father was Italian, from Treviso, in the northeast of Italy.
When I was very young my family moved to Rome, where I first went to school. After attending Classical High School, I studied political science for two years at the Sapienza University of Rome. The family then moved to Treviso, where they eventually settled.
I have lived and studied in Venice—where I attended the Ca’ Foscari University from 1972 to 1975, when I graduated with a doctor’s degree in philosophy—and in California, where I studied English at San Francisco State University, in 1980.
I also lived in England, where I worked as night porter in a historic country house hotel in the heart of Surrey, near London, for about one year (1983).
A High School teacher of History and Italian almost all my working life, now that I have retired I can finally spend more time doing what I love most: writing.
In my spare time I am a frequent global traveller, especially to Europe and USA, which I have “explored” intensively over the years. In my Twitter profile I describe myself as “European by birth, American by philosophy,” which after all is quite an accurate description. Perhaps it also supports the adage that brevity is the soul of wit.
I have always loved and practiced outdoor sports, especially trekking, skiing, kayaking, and horse riding.
I currently live in the Venice area with my wife, Clara, my daughter, Benedetta, and our dog, Lady, a Golden Retriever that swims like a fish and is crazy about tennis balls.
So far I have written three books.

What is the name of your latest book and what inspired it?
My latest book is entitled Being Conservative from A to Z: An Anthology and Guide for Busy Conservative-Minded People. It could be described as an anthology of conservative analysis and insights on some key issues. It’s a book for readers who wish to acquaint themselves with conservative political thought and to get a critical and comparative perspective on what passes for political, social, economic, and cultural conservatism in their own time and place. The book is intended for both European and American readers. It provides readings from European and American thinkers, which besides may help to call attention to some of the peculiarities of American conservatives, who, for instance, believe in Progress even more than liberals do. Last but not least, as the subtitle reads, this volume wants to be a teaching tool and a guide “for busy conservative-minded people,” even though I must confess that I don’t know what “busy people”—whether conservative-minded or not—exactly means… Be it as it may, despite its brevity and modesty, I hope this book, will lead readers to a greater appreciation of conservative values and principles. After all, as we all know, the ways of the Lord are mysterious.

Do you have any unusual writing habits?
I don’t know, I couldn’t really tell… Sometimes my approach to writing is a very methodical one, some other times I prefer a more intuitive approach. It depends upon a lot of factors.

What authors, or books have influenced you?
Speaking about poetry, drama, and novel, my favorite are the classics: true food for the soul, they never disappoint you, they never waste your time. To mention just a few: Dante, Shakespeare, Tolstoy, Dostoyevsky, Alessandro Manzoni, Herman Melville, Thomas Mann. Among the contemporaries I admire Thomas Merton, Umberto Eco, Dan Brown, and Valerio Massimo Manfredi. But I also read a huge number of non-fiction books. My favorite authors range from classics such as Plato, Augustine of Hippo, Machiavelli, Montaigne, Thomas Jefferson, Edmund Burke, Tocqueville, and of course Ralph Waldo Emerson—perhaps the most influential on my thinking—to contemporary authors/thinkers such as Russell Kirk, Bernard Lewis, Roger Scruton, George Weigel, and Alain Finkielkraut, to mention just a few.

However, though I am deeply inspired by the above mentioned authors, I must say that I don’t by any means try to emulate them—basically because most of them are such giants that it would be foolish to expect any success in such a venture, but also, if not mostly, because of Emerson’s warning: “Insist on yourself; never imitate. Your own gift you can present every moment with the cumulative force of a whole life’s cultivation; but of the adopted talent of another, you have only an extemporaneous, half possession. That which each can do best, none but his Maker can teach him” (Self-Reliance).

What are you working on now?
I’m writing a book on a very old-fashioned subject—the medieval knights and the code of chivalry. Which is also the reason why I’m reading—and rereading—a lot of books and essays on that topic.

What is your best method or website when it comes to promoting your books?
My blog, my author website, and my social network profiles.

Do you have any advice for new authors?
I think the above quoted Ralph Waldo Emerson’s warning is the best advice to give someone who wants to start writing books.

What is the best advice you have ever heard?
“A man,” in Ralph Waldo Emerson’s words, “should learn to detect and watch that gleam of light which flashes across his mind from within, more than the lustre of the firmament of bards and sages.”

What are you reading now?
As I already said above, a lot of books and essays on medieval chivalry.

What’s next for you as a writer?
I have a lot of ideas—I guess it won’t be easy to make a choice!

If you were going to be stranded on a desert island and allowed to take 3 or 4 books with you what books would you bring?
The Holy Bible, Dante’s Divina Commedia, Ralph Waldo Emerson’s Self-Reliance, Montaigne’s Essays.