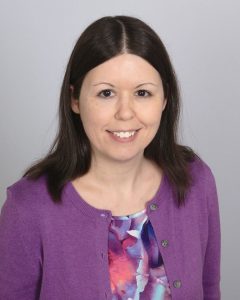 Tell us about yourself and how many books you have written.
So far, I’ve authored one fiction book, and co-authored a nonfiction book (The Authentic Twitter Platform) with Jeannie Ingraham. The sequel to my debut novel, Hunter’s Moon, is almost half finished as of the time I typed this.

I’m married to a hairy guy named Oscar, and we live in Ohio with our fluffy fur baby, Thatcher (a Shiba Inu mix). Though I write werewolf fiction, I moonlight as a vampire. I also have a certain superpower related to making puns. See my blog and Instagram (@sarahawa42) to read about that!

What is the name of your latest book and what inspired it?
Hunter’s Moon was inspired by a Harry Potter fanfiction story I was working on in college. My favorite HP character, Remus Lupin, was in the story. I decided I wanted to make it my own, so of course I had to remove all the Harry Potter elements, characters, etc. It now takes place at a small, somewhat secluded college in northern Pennsylvania. I went to a small, isolated college—in Georgia—so you can definitely see what inspired the new setting I chose. But I needed a place like Pennsylvania (my home state’s neighbor) with more forested areas and greater seasonal variety…like snow to make tracks in. I won’t say anything more about that pivotal scene, as it’s a huge spoiler!

My own struggles in life inspired the themes of pain, suffering, coming of age—and realizing the world isn’t nearly as easy, safe, or fun as you thought it was when you were a kid. My main character, Melanie, contracts a painful, dangerous, and seemingly incurable condition, and she has to learn how to deal with her new reality, while fighting to change it. A year out of college, I got so sick I almost died, and was diagnosed with one of the top five deadliest autoimmune diseases, all of which are incurable. But it’s a lot more fun to write about werewolves and stalkers and secret organizations than to write about all the time I’ve spent in hospitals and all the chemo transfusions and bronchoscopies! (I do love books like Five Feet Apart, but I can’t write them.)

Do you have any unusual writing habits?
Haha, I hear a lot of writers would never have finished their books without coffee and chocolate. Same here: dark chocolate and coffee with caramel almond-milk creamer!

I don’t have any strange rituals or listen to a certain kind of music to get in the mood. I mostly just stare into space while my subconscious plots and schemes, and I daydream and try to figure out how all these crazy ideas and character arcs can fit together. Then, suddenly, a flurry of inspiration hits, and my keyboard gets the workout of its life for a half hour. … And then I’m back to the daydreaming and staring. And maybe a little social media…

What authors, or books have influenced you?
As I said above, the Harry Potter books, plus several other people’s fanfiction stories involving the Marauders. Shoutout to Jess Pallas and Iniga! I grew up reading J.R.R. Tolkien, C.S. Lewis, Stephen R. Lawhead, Douglas Adams, Kathy Tyers, Frank Peretti, Patricia McKillip, the Animorphs books, some Star Wars novels, and loads of other fantasy stories, so it’s possible that all of those may have influenced me a little bit. (I didn’t read Harry Potter till college.) Ah yes, and I can’t forget By These Ten Bones by Clare Dunkle. I discovered that fantastic book after college, and it’s one of my absolute favorites; I’ve reread it many times. There are some pretty strong similarities between my book and that one—such as how it’s not fun but very dangerous to be a werewolf.

What are you working on now?
I’m almost halfway through writing the (first draft of the) sequel to Hunter’s Moon. Its working title is Feral, but that may change. The plot seems to be going in a different direction than I thought it would. As COO of Thinklings Books, LLC, I’m also wrangling a bunch of writers, proofreading, and I’m in charge of our social media. So I’m pretty crazy-busy right now and I really just want a nap! (Can you guess how clean my house is? 😉

What is your best method or website when it comes to promoting your books?
I like to use sites like Booksprout and Booksirens to get book reviews. Those Amazon reviews are crucial! Booksirens has great lists of bloggers to contact. Every spare minute I get, I’m finding more promotional sites, brushing up on my social media skills, and building my platform; I’ve got a decent (and growing) Twitter following, have been doing fairly well with Facebook ads, and am now getting pretty good at Instagram. Like anything worth doing, it takes a lot of time and effort. Just put yourself out there, anywhere and everywhere you possibly can. Make lots of writer friends online. Write guest posts for blogs, and do exchanges. Try to get a Publishers Weekly review. Find any website that has a “library list” of books, and get your book on that list. Be everywhere you can be! (But avoid social media burnout. I’ve teetered on the edge of it…yikes. Trying to avoid that again!)

Do you have any advice for new authors?
It’s true that you should gather as big of a social media following as you can. BUT if you haven’t spent the hours and hours and even years necessary to hone your writing skills (we all suck at first), you’re just going to be promoting a lesser-quality product to a lot more people. Actually, some people prefer that—on both ends: buyer and seller. I’m broke and live mostly in my head, rather than the real world, so I prefer, for example, cheap products for my home (unless it’s really important, like plumbing or fixing the roof). So in some areas I am willing to go for lower quality; this is not meant to be derogatory—we all have different preferences and tastes, and some of what I mean by “quality” is subjective. I just want you to be aware of both sides of the coin: Each person only has so much time, so you can spend it on becoming an excellent writer, or you can spend it on becoming really popular. (Neither choice is wrong; it’s just a choice.) Rare unicorns can do both. If you are one, I envy the heck outta you!

Also: since the market is so heavily saturated, you have to find something that makes your book and your brand stand out. It’s like interviewing for a job that thousands of other people are trying to get, too. (This is where quality can give you a real edge; the resumes that get tossed first are the ones full of typos, bad formatting, etc.) Be authentic; dig deep and really discover who you are, and then let your beautiful light shine! The right people will be drawn to you. Find your tribe. (Read my book The Authentic Twitter Platform for more detail. Lol, I couldn’t help throwing that plug in there!)

What is the best advice you have ever heard?
Basically, what I just said above about being yourself—and being involved in a supportive community. I was bullied at school every day from K–12, and that made me feel like there was something fundamentally wrong with who I was—like it was a mistake that I existed. I’m not beautiful or popular or athletic. I’m quiet and don’t know how to talk to people. My personality was not like anyone else’s. (I sometimes suspect I’m on the autism spectrum. At least, dancing around the edge of it.) I’m a highly sensitive person, and the other kids’ words were like knives. I drew so deeply inward that I felt lost and didn’t really know who I was or what I wanted in life for decades. I even contemplated suicide for several years. In my late twenties, I finally came out of that darkness and isolation…it’s too long of a story for here, but I’ve grown by leaps and bounds and am much more confident and comfortable with who I am. Soli deo gloria. I’ve found my tribe and some amazing friends—I also found the wonderful man who’s now my husband! Community is SO important. We’re all in this together, and we need each other.

What are you reading now?
Oh, so many books…I’ve got a bad habit of bouncing around between a bunch of different ones. I’m reading The Young Unicorns by Madeleine L’Engle, Night of the Dragon by Julie Kagawa, The Wolf Gift by Anne Rice, and a few nonfiction books (including one about coping with anxiety…guess why!).

What’s next for you as a writer?
Finding time between Thinklings duties to finish the sequel to Hunter’s Moon! And then the third book in the trilogy. Pray for me, haha.