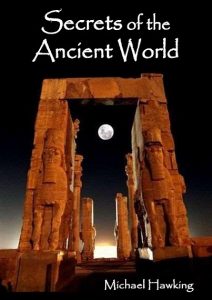 About Secrets of the Ancient World, The Sacred Knowledge by Michael Hawking and Jenna Wolfe

Free on Amazon September 18th and 19th, always Free on Kindle Unlimited. New Release. Explore the mysteries of Ancient Civilizations and their profound Sacred Knowledge. From the threshold of known history, accounts of prehistoric civilizations possessed of advanced knowledge and powers have appeared in the legends of cultures worldwide. That profound sacred knowledge is revealed and explored in this book.
“Everything we’ve been taught about the origins of civilization may be wrong. Old stories about great lost civilizations of prehistory, long dismissed as myths by archaeologists, look set to be proven true.” —Centre for Geotechnology
For decades the archaeological community labored under the theory that civilization began after the last Ice Age. The theory conjectured that prior to that time humans were no more than primitive hunter-gatherers incapable of communal organization or sophisticated abilities, that it was only after the last glacial period that our ancestors began to develop agriculture and complex social structures, sometime around 4000 BC, and that the first cities did not develop until about 3500 BC.
Recent discoveries have dramatically undermined that that theory. Contemporary research has unearthed buried civilizations and discovered submerged cities one after another—archaeology now reconstructs an unsuspected antiquity of man and paints a canvas of stunningly mysterious dimension. Previous academic accounts of the origins of civilization have fallen forfeit to finds at archaeological sites such as: Gunung Padang in Indonesia (c. 22,000 BC), Nabta Playa in the Sahara Desert of southern Egypt (c. 16,500 BC), Puma Punku in the Andean Mountains of western Bolivia (c. 15,000 BC), Göbekli Tepe in the Anatolia region of Turkey (c. 12,000 to 9,000 BC), the vast submerged city in the Gulf of Khambhat off the Arabian Sea coast of India (c. 9,500 BC), the underwater Yonaguni complex offshore of the westernmost inhabited island of Japan (c. 8,000 BC), and the extensive sunken city of Dwarka offshore of the state of Gujarat, India (c. 7,000 BC).
The most ancient of these archaeological finds indicate that sophisticated civilizations existed not only long prior to the last glacial period, but most importantly prior to the ‘Younger Dryas Boundary’ cataclysmic event as well. The ‘YDB’ event, which occurred circa 10,770 B.C., is thought to have been caused by the air-bursts or impacts of several comets, resulting in massive firestorms sweeping across continents and initiating a 1200 year-long epoch of terminal environmental change, including devastating cold, perpetual darkness, massive floods, and catastrophic faunal extinction, effectively wiping early civilizations from the historical record.
From the threshold of known history, accounts of prehistoric civilizations possessed of advanced knowledge and extraordinary capabilities have appeared in the legends and traditions of cultures throughout the world. As a consequence of untold millenniums of secrecy, even to the present day only fragments of that knowledge have been discovered or disclosed. Therefore, there are three purposes for this book: 1) to survey the evidence of such civilizations; 2) to explore in detail the powerful, sacred knowledge of the ancient world; 3) to examine the possible origins of the ancient world’s knowledge and extraordinary accomplishments.
As the reader will discover in this book, owing to a remarkable series of events in an isolated region of the Himalayas, explorer Hawking encountered an extraordinary group of people and, through those encounters, was privileged to learn that the occult knowledge and practices of the ancient world have been preserved and are actively utilized to this day. This book contains an in-depth exploration of that refined and powerful knowledge. New Release, e-reader page count 315 (estimated). For more information, please see the ‘Look Inside’ feature on the book’s Amazon page. Thank you.