Yesterday while walking around the Tucson Festival of books I was asked a lot of questions by authors about social media. When I told them that their book would be spread across our social media channels by submitting to our site they asked me if it was free to submit a book why would I pay for the $10 promo.

I told them that our social media doesn’t blast out every book we get submitted to us. It is random but the paid promo goes out at least once and sometimes if it is a slow day we will push it out twice. Today was a slow day and a book that was featured was called “For the Love of Ireland by Judy Leslie”.

We sent it out in our social media stream and it seemed to take on a life of it’s own. It went out at 140 in the morning I think it is EST for those asking.

Featured Book: For the Love of Ireland by Judy Leslie – Judy Leslie has studied both literary and popular fiction … http://t.co/QCrFogAKno

It was RT’d by Lorraine Pestell who has over 2200 followers. So between our 4900 followers and Lorraines the Tweet was in 7100 peoples eyes. Not so bad.

The second Tweet we sent out did a lot better as it was RT’d by Joan who runs our sister site Book Reader Magazine. Joan has 14,500 followers 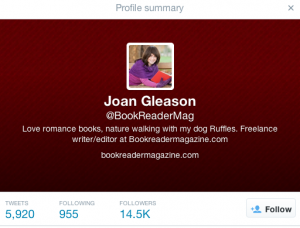 RT @ourawesomegang For the Love of Ireland by Judy Leslie – Judy Leslie has studied both literary and popular fict… http://t.co/cpaxboxCBd

Here is two screen shots showing the amount of followers each one of them had. I could only fit 5 authors in each screenshot as the Twitter window didn’t let me scroll. 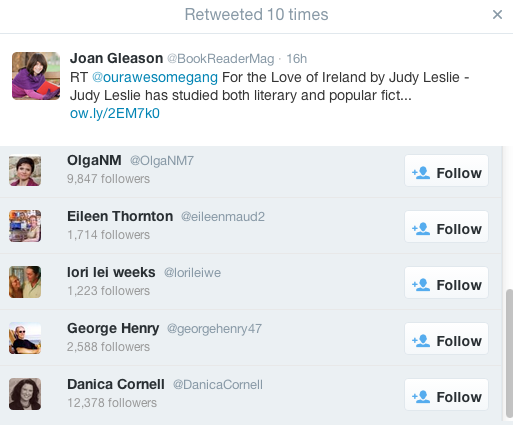 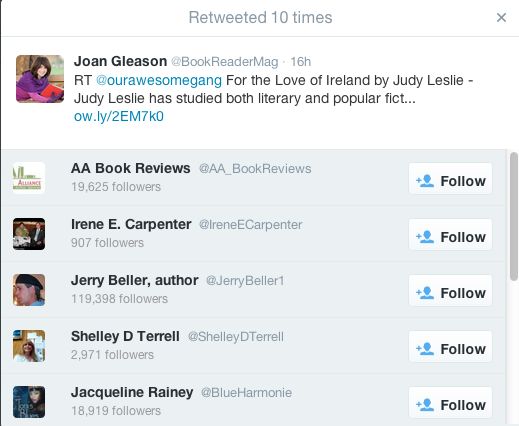 What should also be mentioned is these Twitter accounts are mostly other authors or readers that have this following so it is kind of targeted in the reading niche. Did I mention that this only cost $10 and it is the bonus on top of the 3500 people that get the email the book featured? I haven’t even mentioned the Facebook and G+ social accounts! Now I can’t say this will happen with every book but I am pretty sure our reach is very good.

Much better that having a Twitter tweeting service that isn’t targeted.