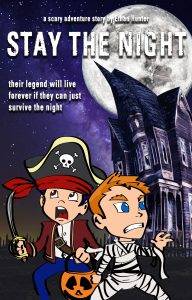 About Stay the Night

On Halloween, two children try to sleepover in a house where local legends say no one has ever survived the night. What they find, though, is that some legends are real. And very deadly. Confronted with a mad scientist and his terrifying, monstrous creation, can these brave best friends live to tell their amazing story? Armed only with their 12-year old wits and some free candy, they’re in for either the best, or the last, night of their lives.

Author Bio:
Ethan Hunter is a screenwriter, author, and chipmunk enthusiast. His latest films are the upcoming “Suicide for Beginners” starring the late Sid Haig and “Madam Massacre’s Quiet Evening at Home.”

His novella “How Emma Stone Ended the World” was published in 2014 and is even weirder than you probably think.

He was this close to becoming a major league baseball player except it turned out he had absolutely no talent for the game. Making stuff up for a living seemed like a decent fallback job.

He lives mostly in the United States and can often be found in the company of a cat, two puppies, and a mini pig.