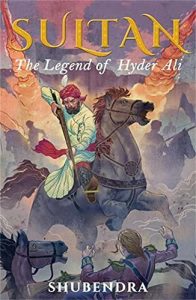 About Sultan: The Legend of Hyder Ali

It is the eighteenth century, and turmoil is brewing all over India. In the country’s south, Hyder Ali, an ordinary soldier, rises through the ranks to take over Mysore, a small kingdom that is in danger of being swallowed by the Marathas and the Nizam of the Deccan. Despite overwhelming odds, Hyder Ali forges an empire right under their noses through tact, bravery and unparalleled military strategy. Before long, he holds sway over a kingdom that spans from the dry lands near the Krishna River to the lush forests of the Malabar.

But the angry Marathas are thirsting for revenge, and the English are fast gaining ground. Will the Sultan of Mysore be able to crush these formidable enemies? Will his son Tipu come to his aid? Or will he be forced to surrender the vast and powerful kingdom he has so passionately built?

Author Bio:
Shubendra is an avid traveller exploring places that have fallen through the cracks of mainstream history. His primary interest is in unravelling the lost stories of early modern India through field research and analyzing long forgotten military accounts.