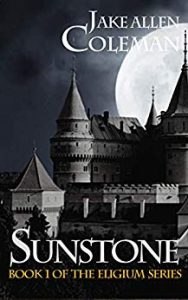 One of the five stones holding the Ban together has been stolen. Now one young woman must put her skills with the sword to the test and recover the Sunstone before it’s too late.

In Cynneweald, magic has been forbidden since the Dragon Wars, yet not everyone is willing to follow those rules. Krystelle is determined to reach her old mentor and enlist his help, but when the dark wizard who took the stone also kidnaps her, a chance encounter in the forest may be her only chance.With the self-appointed guardians of the Ban on their heels, Krystelle and her new friends must infiltrate the wizard’s lair and bring it back to its rightful home before the balance of power holding the kingdom together begins to topple.

Fans of Terry Brooks and Robert Jordan will enjoy this fantasy adventure.

Eligium: The Complete Series is now available in one volume on Amazon in both ebook and print formats.

Author Bio:
Jake Allen Coleman is a Fantasy and Science Fiction author born and raised in Southern California, eventually pursuing a degree in Physics from the University of California and migrating to the middle of the country to Texas. He now calls Colorado Springs home, along with his wife and three kids.

One of Jake’s earliest literary memories is of Frodo and Sam outside the gate at Bree. The wall was bigger, the night darker, and the thunder louder, but reading J.R.R. Tolkien sparked a lifetime love of reading fantasy that later expanded to include Science Fiction.