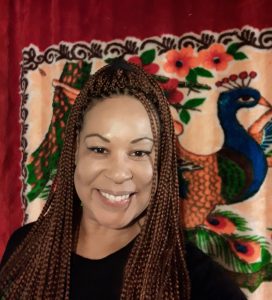 Tell us about yourself and how many books you have written.
🙋🏾‍♀️

My name is Tabitha Womack

I’ve always had a vivid imagination and a desire to pull people from their own minds and submerge them into a world of my making. I’ve been a performer, a painter and an author in some form my entire life.
I have a new series being released on June 1st. Its titled:

In 2014 I had spinal surgery after four years of horrible Mobility. I have fibromyalgia and a degenerative bone disease. As joint’s fail they need replacing or injections.

It is a very scary very depressing disorder.

I was in my bed for months afterward feeling of a slow and painful. Thankfully,I had a husband that took very good care of me. What does with all the experiences we can let it make us better or bitter. I chose to create.

I’m writing a series for young adults with a new kind of heroine. With so many teen books and movies about vampires, witches and things…why not write about God magic? Sound funny?

Well, it’s an oversimplification. But the star of the series is a soldier in God’s army. She fights by tapping into the “magic” of creation and destruction. God magic.

We label stuff so that we can wrap our minds around things.

God exist outside the dimensionality of time, space and matter. Human beings are only aware of 11 dimensions and we can’t grasp the majority of them.

But this series will hopefully captivate the teen imagination and feed them scripture at the same time. I have four grown kids. Part of me wishes that I would have written the series earlier and gotten them involved. I watched them get into magic based kid stuff that barely had substance. Nothing about these heros taught them anything for their betterment. None of them bolstered morality. I wanted to create something that did.

It’s the year 2063. A new world order has been established. It is a society where technology and humanity are symbiotic. A pretty amnesiac soldier, a street kid, an Indian chief, a tomboy mechanic and a Pastor make up a motley crew of broken souls. Scripture, semi-precious stones, scientific jargon, angels, demons, a pastor, a necklace, a journal and a broken soldier….

It’s a puzzle they had better figure out. Because demons are real and hell is coming.

I’m a strong believer in, “can’t nobody stop you but you.”

We are each responsible for our own happiness. I find happiness in the creating things.

This is my blog

In the year 1818, Kerah has inherited an Egyptian merchant business, the estate and the mines. She is plunged into an entirely new world after her charmed life is shattered by a ruthless betrayal.

After a tremendous loss and violent storm at sea, she finds herself at the mercy of a charismatic and handsome foreigner. The Scotsman is determined to keep her by his side. She has other plans.

Circumstances dictate that she must accompany strangers to Scotland.

Kerah finds herself completely out of her element and unexpectedly surrounded by blood and death. She must battle her way through the unknown at every turn. Desire collides with duty in this unique tale of historical intrigue.

This book is a compilation of a three-book series. It is action-packed and fast-paced. It’s a diamond in the rough. Romance is a broad genre, but it’s never been done like this before.
I have someone that was willing to edit it for me. Shes still working on it. Forgive the format weirdness and whatever. My laptop is ancient and glitchy. But I couldn’t let that stop me. Would you help give this traction?

What is the name of your latest book and what inspired it?
See above

Do you have any unusual writing habits?
I people watch for character development

What authors, or books have influenced you?
Nora Roberts & Iris Johanson

What are you working on now?
Science Meet God

What is your best method or website when it comes to promoting your books?
Facebook so far.

Do you have any advice for new authors?
Dont let anyone tell you that you cant do it. Dont give up.

What is the best advice you have ever heard?
Everybody wants to wear the crown until they discover how heavy it is. And you cant be a diamond unless you’re willing to get cut.

What are you reading now?
I read the works of other new authors. I feature a couple newbies every so often on my blog. We’re on the same team so we’ve gotta stick together.

What’s next for you as a writer?
I refuse to believe that you can only be successful if you have the capital and social connections. I have to believe that the underdog can claw her way to the top, against the odds.

If you were going to be stranded on a desert island and allowed to take 3 or 4 books with you what books would you bring?
The lion the witch and the wardrobe, lord of the rings, the illiad and the odyssey.