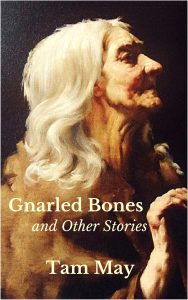 Tell us about yourself and how many books you have written.
My background is a little funky. I was born in Israel but grew up in the United States. My family moved back to Israel in the mid-1980’s and I came back to the States on my own in the mid-1990’s and have been back ever since. Right now, I have one book out. It’s called Gnarled Bones and Other Stories and it’s a collection of five dark psychological fiction stories where characters’ pasts infiltrates their present and future in ways they couldn’t have expected and have to deal with.

What is the name of your latest book and what inspired it?
As mentioned above, the title of my latest book is Gnarled Bones and Other Stories. Three of the stories, “Mother of Mischief”, “Bracelets” and “Broken Bows” were written during a difficult time in my life when I was finding out a lot about myself and my past that I had been denying for years. They were my first attempts at psychological fiction. The other two stories, “A First Saturday Outing” and “Gnarled Bones” were written later, once I had begun to establish my writing voice and style.

Do you have any unusual writing habits?
No, not really! I have discovered that writing the first draft by hand in small notebooks and then transcribing them onto Scrivener where I do subsequent drafts and revisions works the best for me. There’s something about writing by hand that frees my creativity a little more than working directly on the computer, probably because it forces me to slow down and think about what I’m writing.

What authors, or books have influenced you?
The book that has most influenced me is Anais Nin’s “Under a Glass Bell”. It’s a more experimental collection of short stories and character studies written in a lyrical prose style. I discovered it in a small bookstore in Israel on a small shelf with English-language books. It really opened my eyes to the possibilities of the English language and the beauty of lyrical prose, as well as the idea that you could really take a character and explode them and show who they are from the inside out.

What are you working on now?
I’m working on a few projects. I’m just about done with the first round of revisions for the first book of my Waxwood series, The Order of Acateon, which I’m giving over, chapter by chapter, to my awesome critique group to help me with the second round of revisions. I’m just about to begin the first draft for the second book in the series, The Claustrophobic Heart. I’m also working on another book titled House of Masks which I started during National Novel Writing Month last year.

What is your best method or website when it comes to promoting your books?
I’m still starting out so I’m just getting used to finding all the promotional opportunities available to indie authors. So I’m afraid I can’t really answer that question :-). One thing I’ve really loved doing is author events on Facebook. Whether it’s an author takeover or a book auction or a release party, it’s really fun to get involved with other authors and interact with readers.

Do you have any advice for new authors?
My only advice would be to write what you love in the way that you love. It’s very tempting to follow the trends with dreams of fame and fortune, but ultimately, your authentic and sincere voice and who you are as a writer won’t come through. You won’t be fooling yourself or your readers in the end. If your true author voice and style happens to be part of a trend, that’s great, but if it isn’t, that’s great too.

What is the best advice you have ever heard?
This isn’t really writing-related advice, but the best advice I’ve ever heard came from my mom. Actually, it came originally from my great-grandmother, who I wasn’t fortunate enough to ever meet, but my mom adopted it. It’s “everything happens for a reason”. When things don’t go as I want them to or expected them to or I’m feeling angry or betrayed or frustrated, I remember that things don’t happen without a reason. It helps me put things into perspective.

What are you reading now?
I’m always reading several books at a time. I love classic literature, so right now, I’m finishing up Jane Bowles’ collection of works “My Sister’s Hand in Mine”. I’m actually rereading it because I discovered Bowles some years ago and read her book then. She has a very offbeat, quirky style that’s not always easy to understand but it’s very intriguing. I’m also reading an early novel by Virginia Woolf called “Night and Day”. And I”m reading a biography on Truman Capote.

What’s next for you as a writer?
Just continuing to learn more about promoting my book, Gnarled Bones and Other Stories and working like mad on The Order of Acateon. I’m really shooting for a January 2018 release date for this book.

If you were going to be stranded on a desert island and allowed to take 3 or 4 books with you what books would you bring?
That’s a tough one! I think my choices would be Anais Nin’s “Under a Glass Bell” and “The Novel of the Future”, since both books helped me to find my writing voice. I would also chose Jane Bowles’ collection “My Sister’s Hand in Mine”. And I would chose something very long and a bit more conventional, like Tolstoy’s “Anna Karenina”.