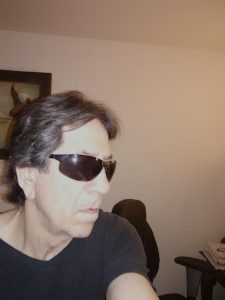 Tell us about yourself and how many books you have written.
Amazon International Best-Selling Author Ted Lazaris

To listen to the audible versions of the DragonMan Series go to this link: https://www.audible.com/search?searchAuthor=Ted+Lazaris

As, author of the DragonMan Series I would like to share with you, my lifelong struggle with dyslexia.

I have always struggled with the problem. In school, it was always terribly difficult for me to read what was right in front of me. And reading, writing, and spelling still to this day remain difficult for me. One thing I’ve learned despite having this learning disability, I can accomplish my goals, if I don’t, get overwhelmed by the big picture… I just take one step at a time.

DragonMan: Face Of The Unknown, authored by Ted Lazaris, who created DragonMan and wrote the series of novels, has accomplished the amazing feat of debuting at NUMBER #1 on AMAZON KINDLE, ahead of David Baldacci and James Patterson novels.

Ted Lazaris, (Dragonman Productions) received the attention and a Letter of Commendation from former First Lady, Laura Bush who commented “I admire your efforts, through writing adventure stories, to encourage people of all ages to enjoy reading.

The following is the Foreword Written in the Novel, DragonMan – Descendants Of Man, by Actress, Kya Garwood, who is also known for roles in films such as Into The Woods – National Treasure – Dark Shadows.

Ted Lazaris is the successful, #1 Amazon best-selling, creator and author of the DragonMan series, a 21st-century superhero saga – like nothing we’ve experienced before. Ted can add screenwriter, producer, and, if that wasn’t enough, writer of lyrics to two songs set to feature in the films, to his impressive list of achievements.

The amazing story of DragonMan was born at the dawn of the 21st Century, when the world, about to change forever, watched in disbelief as four passenger airliners crashed, not only into buildings and a field in Shanksville Pennsylvania but into the American certainty that the horrors of the outside world could not touch them at home.

It was into this world that a new kind of superhero emerged, one for whom the lines between good and evil are blurred. Is he friend? Or is he foe? No one knows for sure. What they do know, however, is that as a friend there is no one better.

DragonMan The Series is being produced for the big screen by Maina Entertainment LLC
The Movie is Coming Soon! From the Best Selling Book Series by Ted Lazaris.

What is the name of your latest book and what inspired it?
DragonMan – INVISIBLE

Do you have any unusual writing habits?
I used to think so but after writing for 20 years I’ve come to realize, everything is as it should be.

What authors, or books have influenced you?
War Of The Worlds.

What are you working on now?
I’m working on book 11 in the DragonMan Series…

After the president leaves office, he does so with a grave and deadly secret. He leaves his predecessor a written message outlining the clear and present danger that is about to befall humankind if he does not take action now. But the message is quickly dismissed out of hand, because of the hatred they share for one another. No one can see the future. No one can see what’s coming. And no one will be ready for what is about to happen. Now the ex-president must find a way to stop what he knows is about to occur… time is ticking down… The human experiment is over.

What is your best method or website when it comes to promoting your books?
Amazon.

Do you have any advice for new authors?
Write for yourself… have with it.

What is the best advice you have ever heard?
The jury is still out on that.

What are you reading now?
Researching for my next book.

What’s next for you as a writer?
Getting me series up on the big screen.
https://www.imdb.com/name/nm3222411/?fbclid=IwAR3UHWQFXkVHrmJqYaQwAbMivTuTPvUlZiAnPLbee4IidiIFqCAtsSXJrV8

If you were going to be stranded on a desert island and allowed to take 3 or 4 books with you what books would you bring?
Probably just one… The Bible.