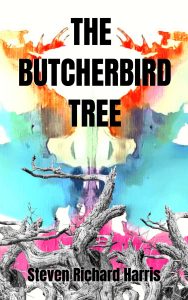 About The Butcherbird Tree by Steven Richard Harris

It´s nineteen ninety-four, a year when the Internet and Amazon are still in their infancy, Mandela blows away the shackles of apartheid, and O.J Simpson´s escape from the law is broadcast to millions. It is also the year that Simon Webb first openly expresses the desire to end his own life.
Within the walls of Frank Newman´s austere consulting room, eighteen-year-old Simon confesses his darkest thoughts as his psychologist – plagued by his own conflictive personal doubts – tries desperately to find a way out of the maelstrom of guilt, self-harm and violent dreams that are consuming his enigmatic client.
These emotionally-charged sessions soon turn into something more sinister, however, after the death of grunge music´s brightest star begins to unravel the true meaning of Simon´s brutal nightmares.

Buy the book, and follow the author on social media:
Learn more about the writer. Visit the Author’s Website.
Buy the Book On Amazon.
Like the Authors Facebook Fan Page.
Follow On Twitter.
Author Bio:
Currently living a nomadic lifestyle with my wife Natalia, allowing me the good fortune to be inspired by the people, places, history and stories we come across on our way.

My first foray into the world of writing came in the shape of “Covidiots – Stories of Idiotic Acts and Bizarre Behaviour”, co-written by myself and Natalia Gómez Álvarez as we tried to make sense of the way people were reacting to the early throes of the pandemic back in March and April 2020. A light-hearted look at human nature, but with a serious undertone that runs throughout this short compendium of true stories, which we felt we just had to share with the rest of the world.

Then along came my first novel, “The Butcherbird Tree”, released in August 2021. Set in 1994, it tells the story of Simon, an eighteen year-old fighting an internal battle of guilt and self-harm and his conversations with his psychologist. Secret desires, self-effacing feelings, personal and professional doubts and gruesome nightmares all reveal themselves in the emotional meetings between client and therapist, until the true meaning of Simon´s dreams become astonishingly clear.

The second novel in the two-part Butcherbird Series is due out in the spring of 2022.