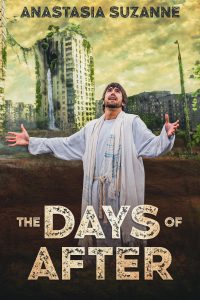 About The Days of After

It is prophesied that one will come to save them all. “He Who Will Come” is the story of a child who will possess the secrets of the men from before. A child who will move stone and wood with only a glance. An old story, told by their father’s father’s fathers. This child of prophecy would grow into a man who would ease the burdens of all villages.

Nobody knew how the great stone giants to the West were built or, for some, sprang up from the ground like the cottages. Nobody knew, but speculation abounded. Noah fell firmly on the side of those who believed there once were men who worked with stone and even made their own stone. He believed men also worked with metal, enormous metals and not just enough to form the knives, plows or other handy but small quotidian tools, but enough to build houses made of the hardest of Earth’s minerals and great tools—tools that dwarfed by far the modest equipment they used now. Noah believed those men knew as a matter of course what today were great secrets. He believed that to those men, the great seemed small, the distant seemed nearby and the mysterious seemed commonplace. He believed that the present they lived in was nothing more than a shadow of the past they had lost and what was more, he insisted that if they all believed and worked for it, the future could hold for them the same glory as this mythical past he believed in.

However, Noah was now dead, and the village had no one to lead them. They had all been taught the prophecy, but without the elders to remind and guide them they were unprepared and unorganized for the atrocities that had been visited upon neighboring villages. They were helpless to save themselves. Now, more so than ever, they were in need of a savior.

Author Bio:
Born September 24, 1974 is a Russian immigrant and heiress of the grand duchess of Russia who was the youngest daughter of Tsar Nicholas II, last emperor of Russia.

The original Anastasia was killed by the Bolsheviks in a cellar after confinement following the October Revolution. After her execution, several women outside Russia have claimed her identity throughout the years, claiming to have survived execution and be heir to the Romanov fortune which has increased her notoriety and made her the subject of much conjecture.

Anastasia Suzanne was raised in an orphanage for girls where she would often daydream about a different life in a different world. Upon her eighteenth birthday she received a considerable trust fund by a mysterious philanthropist. She later emigrated to the U.S. and has recently begun to document the fantastical stories that she imagined in her youth. "The Days of After" is the first of many imaginary magical quests in a dystopian world.