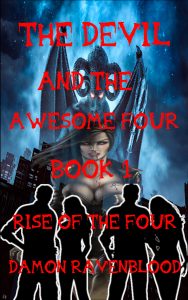 What if your dream life in a new country suddenly became your worst nightmare?
When Ben Connors and Roger Ryan meet Jackie Anderson and Sarah Thomas on a night out in Los Angeles, little did they realize that their coming together would set in motion a chain of events that will bring about the end of days and unleash Armageddon upon the Earth. They had been chosen to become the guardians of the final gateway to hell, one of seven scattered across the globe, and now Satan himself is hunting our heroes down, sending demon after demon at the four trying to eradicate them, so he can rise again and destroy humanity. From his chainsaw wielding lunatic Harry Gordon, who falls for his lies and promises of immortality only to be transformed into a hideous, grotesque zombie like killing machine, to a horde of bloodthirsty Female Vampires that are Hell bent on destroying all men and creating a world where women reign supreme, and the vicious Alien being that crash lands during a storm to terrorize the city of Los Angeles.

The Awesome Four are about to go through hell and back to stop these demonic forces right in their tracks! Will they succeed in stopping the destruction of humanity by the devil himself?
Only time will tell – Follow their adventures and join the fight in The Devil and the Awesome Four Book. 1 Rise of the Four

Author Bio:
Damon Ravenblood is an Author, Poet, Martial Artist, Believer in the Paranormal, has a keen interest in Cryptozoology and is a Theistic Satanist and Occult practitioner. He has been fascinated by the Paranormal and the Occult for many years and has many books on the subjects. It was this love of the Paranormal and things that go bump in the night, that triggered his imagination all those years ago, and he credits Stephen King's awesome book and television mini series 'Salem's Lot for igniting his creative spark.