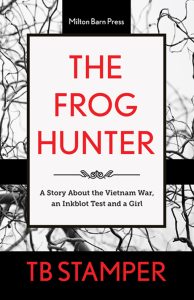 About The Frog Hunter: A Story About the Vietnam War, an Inkblot Test and a Girl by TB Stamper

The Frog Hunter: A Story about the Vietnam War, an Inkblot Test and a Girl, is a memoir that reads stranger than fiction.

The author takes his readers on a fascinating, often humorous, and emotionally moving journey from deadly Ranger missions in Vietnam, to betrayal by his superior officers at Fort Ord, to the inside of an Army psychiatric ward. With a chaotic mind, trying to make sense of the war, Stamper is in a desperate search for truth. He turns to the hippie culture, attracted by their message of love and enlightenment. Unexpectedly, he meets a beautiful girl; the love of his life. The happiness that life now offers him is threatened by the war that consumes his mind and heart. He wants the girl and he wants a future. But how can he find his way back to normal?

Written in powerful prose, the story reveals how war wounds the soul, but then hope emerges, kindled within the tangled aftermath of trauma and loss.

Author Bio:
TB Stamper (Bart) is a poet, writer, and author of a new memoir, The Frog Hunter: A Story About the Vietnam War, an Inkblot Test and a Girl. He grew up in Wheat Ridge, Colorado, the son of devoted classic car enthusiasts, Jack and Shirley. After he was old enough to drive and cruise around in his ’49 Ford pickup, speed bumps began to appear up and down the streets in his hometown.
While cooling off his engine at the local Scotchman Drive-in, Bart explored his love of writing, fervently scribbling poems, satirical stories, and parodies on tiny scraps of paper while sipping cinnamon colas. He continued to write throughout his tour in Vietnam, his marriage, family, union construction gigs, and a career in executive management. He holds the dubious distinction of being red-flagged by the Nuclear Regulatory Commission after writing a humorous short story about his experience working on a nuclear power plant.
Bart won two Florida Writer’s Association awards: First Place, Best Autobiography, and First Place Runner-up, Best Inspirational/Spiritual. During the Vietnam War, he served as an Army LRRP (Long Range Reconnaissance Patrol) with the November Company Rangers, 75th Infantry, 173rd Airborne Brigade. Bart lives in New England with his lovely wife of fifty years. They have two grown sons and four fabulous grandchildren.