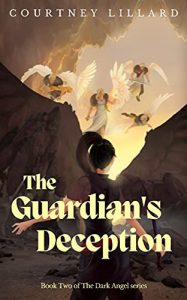 About The Guardian’s Deception by Courtney Lillard

The angelic race was said to have been created by the goddess they worshipped, and vowed to protect the humans living in Asteom from the demons and their potential to destroy the civilized world. Once their task was fulfilled, the angels created a city in the sky named Yeluthia where they dwelled until their kind disappeared from the surface. For decades, the humans were left to fend for themselves against demonic creatures threatening the peace, wondering if the angels would return or if they had become something of a legend.

The Mage Service Law has passed and Coura, her mentor Byron, and the oldest trainees are forced make the move to the capital to join the kingdom’s army. Although there are some familiar faces, Coura’s unnatural magic stirs distrust among her peers as they all adjust to their new lives. What sense of peace she can establish is soon threatened by the arrival of an ambassador from the mysterious “City of Angels” and news of demonic creatures roaming the country. In the middle of the transition is the presence of the demon Soirée, who lingers in Coura’s mind to tempt her frightening and dangerous potential. Now that her secret has been revealed, Coura must face the past, accept what she has become, and defy those who oppose her existence in order to stay alive.

Author Bio:
Lillard is originally from Wisconsin, but traveled around the Midwest with her husband for school. Currently, the pair live in Nebraska. She earned both her B.A. and M.A. in Communication Studies and began writing shortly after. The Dark Angel series is her first adventure as an author. The Shadow’s Grasp was published in January of 2021, but edited and re-released as a second edition with a new cover in July of 2021. Its sequel, The Guardian’s Deception, will be releasing on September 14, 2021. She is working on the first draft of the sixth book of this series and plans to publish them over the next three to four years with two releasing every year. Outside of writing, Lillard enjoys reading from fellow indie authors while sunbathing by the pool, going for walks, playing video games with her husband, and spoiling their cat, Scarlett.