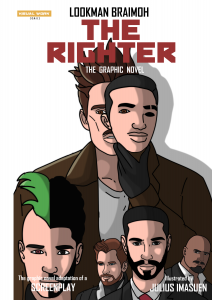 Ex-military, multi-millionaire James Maypother lives a contented life, running a booming business and enjoying a large inheritance. To avenge the death of his younger brother, he will have to risk these privileges and perhaps his life.

Simon Maypother was murdered in an unprovoked road rage incident in London. The killer was put in a secret program and shipped to a new destination for second chance at life. James is aghast with the sentence. In masks, he goes on a kidnapping spree of the civil servants to squeeze out from them information about the killer’s destination — but no joy.

James eventually gets a break by blackmailing a Member of Parliament for information. The intelligence services are trailing him. In New York, the stage is set for a showdown. The New York Police Department and British intelligence must prevent the masked James from taking the life of the killer, but he will not stop until he exacts full vengeance.

Author Bio:
LOOKMAN BRAIMOH is a writer, screenwriter, graphic novel writer, and author of the "The Righter," his debut graphic novel which was adapted from a screenplay.