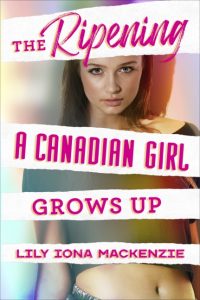 About The Ripening: A Canadian Girl Grows Up

Tillie Bishop never knew her father. So when her mother abandons her, Tillie becomes streetwise. She’s tried to follow the Canadian Girl in Training’s Christian guidelines, but she smokes cigarettes in the church bathroom during the group’s meetings and plays kissing games afterward with neighborhood boys. Barely a teenager, glamour becomes her guiding star, and she fantasizes about dating men and having sex. Even in Calgary, forces of the coming 1960s—a decade of rebellion, discovery, and upheaval—are festering within her. At seventeen, during a stay in Toronto, she becomes a band groupie and throws herself into “sex, drugs, and rock ’n’ roll.” Then, seeking more adventure, she moves to San Francisco, drawn to its psychedelic night life, leading to a deeper downward spiral. But Tillie’s grit and ability to face life’s challenges are inspiring, the seeds for later discovering her artist self. Tillie takes readers on a wild ride. Join her if you dare!

Author Bio:
A Canadian by birth, a high school dropout, and a mother at 17, in my early years, I supported myself as a stock girl in the Hudson’s Bay Company, as a long-distance operator for the former Alberta Government Telephones, and as a secretary (Bechtel Corp sponsored me into the States). I also was a cocktail waitress at the Fairmont Hotel in San Francisco, briefly broke into the male-dominated world of the docks as a longshoreman (I was the first woman to work on the SF docks and almost got my legs broken), founded and managed a homeless shelter in Marin County, CA, and eventually earned two Master’s degrees (one in Creative writing and one in the Humanities).

I have published reviews, interviews, short fiction, poetry, travel pieces, essays, and memoir in over 165 American and Canadian venues. I also taught rhetoric at the University of San Francisco for over 30 years and was vice-president of USF’s part-time faculty union. Currently, I’m teaching creative writing at USF’s Fromm Institute of Lifelong Learning.