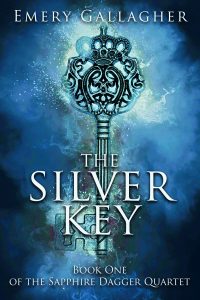 About The Silver Key by Emery Gallagher

Everything Charlie of Windsong wants has just been offered to her. A chance to trade a life of monotony for one of adventure. A chance to be part of the world outside her home and to make her own decisions. A chance to find out if she could be as brave as she hoped.

Charlie never imagined that she would run away from home, but when a mysterious summons from a woman who calls herself Grandmother offers her an opportunity to leave her stifling life behind and go on an unusual adventure, she is too curious to say no. Charlie learns that not only has she been chosen to revive a league of exceptional women called the Order of the Dagger, but that her success in doing so might be instrumental in stopping a war.

All of this newfound adventure and freedom comes at a price. Charlie has to leave her family and the comforts of home behind and learn to take care of herself, she encounters danger regularly from both mundane and magical sources, and she finds herself saddled with an unwanted companion who is a little too curious about who she is and where she’s from. And through it all, she’s on a seemingly impossible quest to find a dagger that could be hidden anywhere.

Charlie’s decision to leave her old life behind and travel through a country adversarial to her own takes her on a journey that not only exposes her to new experiences and challenges, but also tests the limits of her courage, ingenuity, and determination. The people she meets, the trials she overcomes, and the magic she encounters on her trip cause her to reconsider her own view of herself and her place in a world much bigger and more complicated than she had ever imagined.

Author Bio:
Emery Gallagher chased a childhood love of medieval history all the way to a Master of Philosophy in Medieval Archaeology. She writes mostly so she can stay at home with her dog.