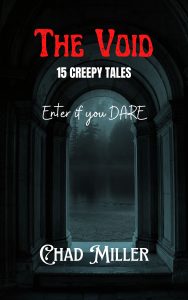 Welcome to the dark world of Chad Miller. Presented before you are 15 dark, morbid, and sometimes humorous tales that explore the evil, depravity, and sickness that devours the human condition. Goodness and light exist in our world, but sometimes the darkness is inescapable, like a black hole, encompassing us all as we fall into the void.

We see an AI life form trapped in his computer cage, as the world has died around him. He’s in despair, his only eyes staring at his decaying creator as he’s forced to face the reality of eternal isolation.

Meet Ana. On the eve of her first day, living away from home in a college dormitory, she slumbers off to sleep on her first night. Ana receives a mysterious night visitor as he pulls up a chair to her bed, so that he can tell his tale. Ana’s father recounts the story of how he was stolen away from her life in a Nazi concentration camp.

And then poor Jared. He’s a pharmacist, overworked, never receiving a break. His overfilled bladder is ready to burst, but the demands of his job won’t allow even a minute for a bathroom run. See Jared’s horror in excruciating detail when his biggest nightmare comes true when he finally reaches the toilet.

The darkness is unavoidable, so pry your fingers from your eyes and take a peek inside. Enter if you dare…

Author Bio:
Chad Miller has a B.A. in psychology from Syracuse University and a Pharm D. from the University of the Sciences in Philadelphia. Chad has been crafting his writing for 25 years and is proud to announce his debut novel, Doyle & Braham in The Prisoner of Fear. He is a Pharmacist and lives in drab and lifeless Delaware. Chad is a Philadelphia native and dreams of visions of Moscow and Philadelphia. He is currently learning the Russian language. Luckily he's in love and lives with his girlfriend Natasha and her daughter Sasha, and his three children Killian, Willow, and, Halina.