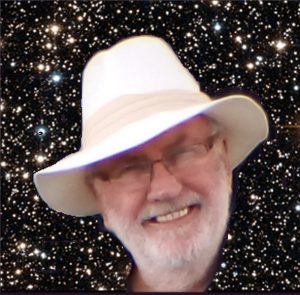 Tell us about yourself and how many books you have written.
After a career in tourism in the Highlands of Scotland, I retired to put several of my science fiction ideas onto paper – or, more accurately, into a Word file.

I had already written two books which arose out of my work. The first of these was SCOTLAND’S BLOODY HISTORY which puts our confusing past into chronological order by majoring only on the most gory events. My other book, having lived on the side of Loch Ness for forty years, was a natural – LOCH NESS, NESSIE & ME. I was involved in all the major expeditions since the late seventies and set up the Official Loch Ness Exhibition in 1980. My book is written from the sceptical point of view and is extremely comprehensive, including exposing much of the evidence. It is the only book on the subject written by a resident of the area.

My retirement, however, has given me the time to publish my science fiction novels of which there are now five with two in the pipeline. I offer my Moonscape novel free of charge to people who sign up for my Reader Club at http://harmsworth.net , so you can sample my work for free.

What is the name of your latest book and what inspired it?
There was a progression, so to understand the reasons for my latest book requires a knowledge of what went before.

My first novel was MINDSLIP which develops an idea I had over forty years ago. A nearby supernova coincidental with a coronal mass ejection, showers the Earth with radiation which causes every living creature to swap minds – old to young, male to female, animal to human and vice versa. Can you imagine it? Well this is my story about it.

The strange ending of Mindslip inspired me to write a female lead character in my second novel, THE VISITOR, in which a dynamic woman astronaut discovers an ancient alien artefact in low-Earth orbit.

MOONSCAPE, my free book, came next – we all know the moon is dead, but…

THE DOOR is a story which grew out of some of the world’s current environmental and climatic problems in The Visitor. In it I use temporal anomalies, quantum entanglement and matter transfer to allow a man, who is walking his dog, to become the saviour of humanity.

All of that led into my latest work is FEDERATION, the first of a trilogy involving a galactic empire which stumbles upon the Earth with its wars, plastic pollution, overpopulation and deteriorating environment. The Federation’s political system is anathema to most of us, but, with the help of automatons, offers the possibility of utopia to the Earth – but are they a force for good or evil and how will the world handle its political system being turned upside-down?

Do you have any unusual writing habits?
I always find the first ten thousand words difficult and have to be on my own. After that, it is not unusual to find me writing with a laptop in the lounge while watching Tottenham Hotspur, my life-long football (soccer) team. I am lucky to be able to shut out whatever is happening around me.

I also work outside during the summer. I discovered that the Macbook has an anti-reflective screen and is perfect for writing in the garden. With the view of Loch Ness and our isolated location, it is just perfect. [image you may use is here http://harmsworth.net/working-in-garden.jpg]

I touchtype and have worn out the EIOADLN & M keys. They still work, but are now just white! Guess I am too used to an old typewriter from my earlier life and pound the keys.

What authors, or books have influenced you?
My main influences have been Arthur C Clarke, Hal Clement, Asimov, Bradbury, Aldiss and Zenna Henderson. I find most modern science fiction violent, full of wars, dystopia or fantasy. There is hard SF out there, but I’m afraid I am not a fan of mindless destruction. So far, there are no wars, superheroes, or dystopian events in my work and I’m told it can be enjoyed by people who would not normally select the genre.

What are you working on now?
Currently, I have two novels in play – MOONSTRUCK, the sequel to Moonscape and FEDERATION & EARTH, the second in the Federation trilogy. I hope to have one finished by September and the other by November, but I’m not sure which will be first.

What is your best method or website when it comes to promoting your books?
I am a relatively new author and am promoting on Amazon, Kobo and D2D who distribute to Barnes and Noble, the iStore and others.

Do you have any advice for new authors?
I wasted nearly four years trying to find an agent. More than a hundred rejections. Not one agent or publisher was interested in reading beyond the three submitted chapters. Yet, on Wattpad, a reading platform, praise was being heaped upon all of my books and THE VISITOR (which I’d put onto Amazon with a poor cover and unedited) acquired some incredible reviews on Amazon. Now that it is properly edited with a professional cover the reviews are even better.

So, I abandoned traditional publishing and, since 27th March 2019, I’ve been following Mark Dawson’s Self Publishing Formula. Since re-launching my books on Amazon, my sales have grown beyond all proportion and I have not yet started Mark’s Ads4Authors course.

Moral, unless you are going to be extremely lucky, go for the self-publishing route, but don’t forget to invest in good editing and book covers.

What is the best advice you have ever heard?
When in doubt, do it!

What are you reading now?
Encounter with Tiber by Buzz Aldrin and John Barnes.

I’m still in the early stages, but I was not enamoured by the huge list of characters in the opening pages. Not easy to read. Hopefully it will improve.

What’s next for you as a writer?
More writing and hopefully supplementing my pension with increasing book sales. The trouble with being 71, is that your mind is its prime of life, but your body exhibits all the signs of age. Only science fiction can tackle that, currently!

If you were going to be stranded on a desert island and allowed to take 3 or 4 books with you what books would you bring?
Asimov’s complete Foundation series (in a single volume to stick to the rules! LOL); The Harry Potter books (same rule); Fahrenheit 451 and Clarke’s Fall of Moondust.