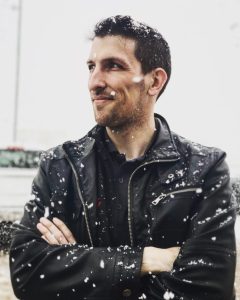 What is the name of your latest book and what inspired it?
The latest, which is the first, is called The Evil That Came From The Sky. The inspiration pretty well came from zombie films that I realized would be far more scary if there were no guns. So, I set an apocalyptic zombie outbreak in a medieval setting, with a few twists!

Do you have any unusual writing habits?
I tend to write too much and need to “trim a lot of fat”. I have the opposite of writer’s block. I find myself doing most of my writing when I should be doing more important things, like adulting and all that other stuff. When I’m really not supposed to be writing, like, say, while I’m at work, is when I come up with my greatest ideas and write them all down. It’s bad…

What authors, or books have influenced you?
Where do I start? Geez, I’d have to say I am greatly influenced by Stephen King. I was really obsessed with The Stand. I loved how many characters he created and how they were all so different, yet equally important to me and I feel that it would be such a tremendous feat to carry such a massive idea on the shoulders of so many characters. That has really inspired me. A few others that come to mind would be S.D Perry, when I was a kid I read all of the Resident Evil books and was just obsessed by them, being that I was such a videogame addict. Another is definitely Dan Abnett and Graham McNeill, who work for the Black Library writing Warhammer stories, which I love. I’m missing quite a few, I realize, but those are the bigger influencers for me.

What are you working on now?
Right now I’m working on a seriously depraved horror/guilty pleasure novel that is certainly not for the faint of heart. It’s my Magnum Opus, drawing dark and disturbing energies from the darkest recess of my depraved imagination. You’ll have to stay tuned for that one.

What is your best method or website when it comes to promoting your books?
I am still currently discovering that!

Do you have any advice for new authors?
Write. Especially if it brings you serenity or any form of joy. For me, it’s an escape and I feel like now, more than ever, it’s important to leave this realm and dive into your own and create a place whether that be dark, bright, happy, or sad and get lost in it and put it on paper.

What is the best advice you have ever heard?
I might have to come back to this one.

What are you reading now?
The Institute by Stephen King.

What’s next for you as a writer?
I will be writing a massive trilogy that ties into The Evil That Came From The Sky. It’s been in the making for many, many years and I finally have the balls to get it out there and share it with the world!

If you were going to be stranded on a desert island and allowed to take 3 or 4 books with you what books would you bring?
The Stand, Hollow Kingdom by Kira Jane Buxton (fricken hilarious btw), Horus Rising by Dan Abnett, Skaven by William King (such a fun novel with a bundle of adventures all rolled into one big one.)