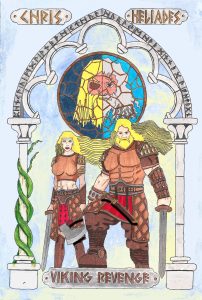 About VIKING REVENGE by Chris Heliades

Thrargrimr is a dying, viking warlord with unfinished earthly business; avenging the deaths of his brethren in the hands of a Cthulhu cult.
The trouble is, a Valkyrie is sent to claim him.
Also, a demon wants his soul, really badly.
Oh, and his guardian-angel isn’t happy with the whole situation.
And don’t forget the monk from the East who insists that the Universe has issues with them.
And there’s the mummified remains of a Pharaoh…
And some intelligent ravens…and the Fates…and a couple of gods…well, it sounds complicated but it really isn’t. Except from the pigeon mariachi band…

Author Bio:
Chris Heliades hails form the eastern fringes of the western world, also known as Greece.
A father of two daughters, a husband, not a superhero, no magicals powers, no extraordinary abilities but, he's only 43 and who knows what could happen in the future?
Literary gods, demigods and heroes that he worships include Terry Pratchett, Douglas Adams, Neil Gaiman, J.R.R. Tolkien, Michael Moorcock, H.P. Lovecraft, Robert Howard and Frank Herbert, all of them sprinkled with an unhealthy dose of Monty Pythons, Eddie Izzard, Bill Bailey and Dylan Moran. Mix them all up with tons of Warhammer 40000 and heavy metal music, comic books and Greek mythology and there you have it.
Quite messy, if you want my opinion…