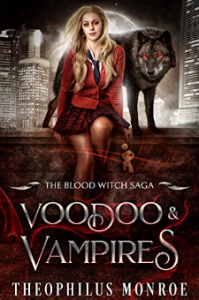 When one of the world’s most gifted witches becomes a vampire, you’d be wise to heed this advice: Don’t f*** with her.

My sire was staked moments after I was turned.

As a youngling, the Voodoo Queen took me in. She taught me her art.

I’ve been working with the new Mistress of the Vampire Council.

She trained me in the ways of vampirism, the path of the night.

Most witches won’t mess with the power latent in blood.

It’s dark. It’s dangerous. But if you can master it…

You can harness the power of life itself.

I’m supposed to seduce and assassinate the vampire king…

The Voodoo Queen has evoked Erzulie, the Loa of Love, to render him susceptible to my allure

Once I’ve enthralled the king my orders are to stake him and cast a spell to harness the power that lingers in his blood.

But there’s one problem…

He has enthralled me instead.

Go up and click ‘Read for Free’ or ‘Buy Now’ to find out how a young, powerful, witch embraces her newfound power as a young vampire.

Voodoo and Vampires is the first volume in Theophilus Monroe’s expansive Blood Witch Saga. Hailey Bradbury was only nineteen when she was turned three years ago. She might be a young vampire—but she’s an accomplished badass witch. After all, only the most daring of witches dabble in blood magic.

Readers of Monroe’s Legacy of a Vampire Witch, Voodoo Academy series, or The Legend of Nyx, have encountered Hailey before. Now, she has come into her own. She may be a member of the Vampire council. Her mentor might be the Voodoo Queen. But no one tells this blood witch what to do. Voodoo and Vampires is an action packed Urban Fantasy with a heavy dose of closed-door Paranormal Romance.

Author Bio:
Theophilus Monroe is a fantasy author with a knack for real-life characters whose supernatural experiences speak to the pangs of ordinary life. After earning his Ph.D. in Theology, he decided that academic treatises that no one will read (beyond other academics) was a dull way to spend his life. So, he began using his background in religious studies to create new worlds and forms of magic–informed by religious myths, ancient and modern–that would intrigue readers, inspire imaginations, and speak to real-world problems in fantastical ways.

When Theo isn’t exploring one of his fantasy lands, he is probably playing with one of his three sons, or pumping iron in his home-gym, which is currently located in a 40-foot shipping container.