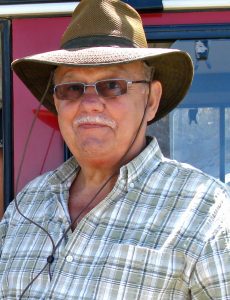 Tell us about yourself and how many books you have written.
Within touching distance of eighty years of age, I came to self-publishing only after I retired from a long career in technical sales. There are now 7 children’s MG & YA books published via KDP/Amazon. I first met my wife, Pat, when we were walking a common path home from different schools when we were eleven years old. Within the next year, my family moved to a different village and we lost touch even though we were only separated by four or five miles. At that age, in those days, it could have been on the other side of the world. Approaching eighteen years of age I was ‘courting’ a lovely young lady, the daughter of a local Methodist Minister when I crossed paths with Pat again. She was visiting a mutual friend who lived twenty five yards away, over the road. Neither recognised the other but there was an incandescent meeting of minds and it was months later before we recognised our prior association, by which time I had parted company with my prior girlfriend. Marriage was delayed until we were twenty-one years old because parental approval was not forthcoming because of our different faiths. How times have changed. We have now been happily married for almost fifty-eight years.

What is the name of your latest book and what inspired it?
The fourth in the series of Jimmy Crikey Adventures is about what lies at the bottom of the Emerald Lake. I have just put pen to paper for the fifth, and possible final, adventure of Jimmy Crikey, which revolves around the exploits of his young friend, Jade, as she strives to qualify as a witch. Jimmy Crikey was born approx. forty-plus years ago on a family seaside holiday in Norfolk. My then four-year-old son was playing in the sand with three or four newfound friends when the heavens opened and the ‘gang’ sought shelter in our crowded beach tent. The noise levels grew considerably and Pat pleaded that I tell them a story, or something, to quieten them down. The story of the bullied redheaded boy who overcame and grew into a hero, was borne. Jimmy Crikey’s exp[loits expanded over the following few afternoon showers to meet a demand for ‘more’.

Do you have any unusual writing habits?
My writing habits are not unusual – to me. I pick up a pen, figurately, and start writing. Usually the words flow but if they don’t I take a break and play some music on my Hammond organ, or decorate a china plate with fairies or castles of flowers or copy Heinrich Schlitt gnome paintings.

What authors, or books have influenced you?
Without doubt, becasue I read her work to my sons, Enid Blighton. Latterly Tolkein’s works Lord of the Rings and in the modern idiom Wilbur Smith from the Where the Lion Roars (or is it Where the Lion Feeds?) and everything he written since – a truly magnificent writer.

What are you working on now?
Still working on Jimmy Crikey but concentrating on Jade’s story as she seeks to become a fully qualified witch.

What is your best method or website when it comes to promoting your books?
I am hopeless at promotion so I scattershot my efforts wherever appears attractive at that moment. All Author is a mainstay, Facebook groups regularly, Book Goodies, Good Reads and Amazon all extract some of my limited budget.

Do you have any advice for new authors?
Grow a thick skin, lower expectations but most importantly NEVER stop writing.

What is the best advice you have ever heard?
Don’t ever give up if you believe you have something to say that will entertain your chosen audience

What are you reading now?
Wilbur Smith -The New Kingdom

What’s next for you as a writer?
Try to get my memoir into shape

If you were going to be stranded on a desert island and allowed to take 3 or 4 books with you what books would you bring?
The Bible
Gibbon’s Rise and Fall of the Roman Empire
An encyclopedia about the Natural world and wildlife