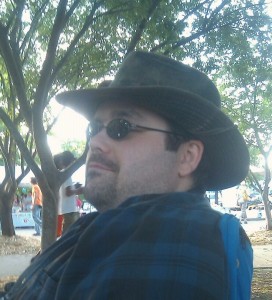 Tell us about yourself and how many books you have written.
I’m an artist, and have been drawing as far back as I can remember. Some of my earliest memories are of drawing my favorite superhero and Masters of the Universe characters, or monsters I had created. I spent a lot of time making my own comics and trading cards too; that continued right up until… well, I’ve never really stopped with the comics! I just don’t have much time to work on them anymore.

I’ve always been into classic horror, especially the Universal movies of the 1930s. I’m a movie buff in general, but those are what I’m most knowledgeable about. I’m also a gamer, and a compulsive reader.

I’ve lived in south Mississippi my entire life. I hate heat and humidity, though, so I’m definitely in the wrong part of the country! I like to travel, though I don’t get to do it nearly as often as I’d like. My favorite city that I’ve visited is probably Savannah, GA. As for places I want to visit, Colorado is at the top of the list.

What is the name of your latest book and what inspired it?
My newest book is Apex Predator: A Grant Mercer Novel. My first book, Nightmare Escapade, was a horror anthology. The story that introduced Grant Mercer was the most popular one. Just about everyone who gave me feedback started with how much they enjoyed that story in particular. I already had plans to feature him in his own series, and the positive reception to the character and his story cemented that.

As for Grant himself, he was born of my love for noir detective stories. I like the idea of that sort of character being thrust into a supernatural underworld and seeing how he reacts. I always like to find some kind of twist when I’m writing in a well-worn genre, something for which vampire fiction certainly qualifies! Once I began writing the story, the character naturally steered himself toward the course he takes around the mid-point of the short story.

Apex Predator picks up right as the short story ends, so I’ve included that story as a prologue to the main novel. I didn’t want new readers to feel that they had to buy another book to get the whole story.

Do you have any unusual writing habits?
I do much more of my work on actual paper than most writers seem to in this digital age. Character profiles, story outlines, random ideas I jot down in case I ever have a use for them, whatever, it all gets written down in a notebook until I’m ready to actually compose a first draft. Even after that, I’ll often head to a local combination coffee shop & record store and write a chunk in my notebook, then type it up when I get back home. I can get a lot more done that way without all the distractions I have at home.

Speaking of my notebooks, that’s another thing: I have color-coded notebooks for each book or set of characters I’m working with. Grant’s notebook is red, of course. 😉

What authors, or books have influenced you?
I had taught myself to read before I was even in school using my dinosaur books and He-Man comics, and from there I was constantly reading. Some of the standouts were Mark Twain, Ray Bradbury, and Edgar Allan Poe, but there are so many others! I’ve had people tell me my writing reminds them of H. P. Lovecraft, and the first few times that happened, I had never actually read anything by him. As big as I was into classics and horror, I really don’t know how that happened. Anyway, that compelled me to seek out some of his work, and after reading it, I could see some of what they were talking about. I also considered it a tremendous compliment!

What are you working on now?
Now that Apex Predator is done, there’s another Grant Mercer novel in the pipeline. Before I get to working on that in earnest, however, there’s another project I’m already well into… it’s too soon to talk about it yet, though! Keep an eye on my blog for announcements regarding that in the future.

What is your best method or website when it comes to promoting your books?
I’ve actually found the most success via social networking. This area is really my weakness, though. I’m far from the best when it comes to marketing, unfortunately.

Do you have any advice for new authors?
Write every single day. Even if you think what you write on some days is terrible, it’s still important to get into the habit of doing it every day. Make the time.

When working on your first draft, remember that it doesn’t have to be perfect. Just get through it, you’ll be revisiting it many times later, so it’s perfectly all right to have some rough patches. Don’t be afraid to skip a particularly troublesome section and return to it later.

Know your characters intimately. This seems like a real no-brainer, but some people still seem to overlook it. Write a min-biography, or write a detailed history, make them a dating profile… whatever works best for you. you don’t have to have their entire life story mapped out in meticulous detail, but it is vital that you have a firm grasp on who they are.

What is the best advice you have ever heard?
Never be afraid to fail. That’s how we learn.

What are you reading now?
I’m currently reading A History of the World in Twelve Maps, by Jerry Brotton. It examines how different maps throughout history have affected our society. I’ve always loved history and looking at old maps, so this is right up my alley!

What’s next for you as a writer?
More writing, and hopefully continuing to grow my readership!

If you were going to be stranded on a desert island and allowed to take 3 or 4 books with you what books would you bring?
To Kill a Mockingbird, by Harper Lee

The Greatest Show On Earth, by Richard Dawkins

For my last pick, I’d grab one of my collections of Robert E. Howard’s Conan stories.