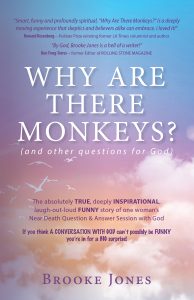 About WHY ARE THERE MONKEYS? (and other questions for God)

As a Los Angeles & San Francisco Radio Personality, I interviewed more celebrities than I can count, but the most amazing interview I EVER conducted occurred after I died and suddenly found myself interviewing God! (and I was given UNDENIABLE PROOF that IT REALLY HAPPENED!) If you think A CONVERSATION WITH GOD could not possibly be FUNNY, you’re in for a BIG surprise!

The US REVIEW OF BOOKS calls it: “Profound…Hysterically Witty…Not to be missed!” and Ben Fong-Torres, former Editor of ROLLING STONE Magazine said: “By God, Brooke Jones is a Hell of a writer!”

Author Bio:
Named “LA’s FUNNIEST LADY” by the now-defunct Los Angeles Herald Examiner, Brooke Jones has spent many years being ‘on’ — on the radio; on the stage, and on the computer. At the height of her career as a Political Satirist, Johnny Carson invited her to be a guest on THE TONIGHT SHOW. When she declined Carson’s generous invitation (for reasons that would make for a very intriguing book…a book that she may get around to writing…someday), Jones became one of the few women on the planet who ever said “NO” to Johnny Carson!

After a long and thoroughly UNamusing battle with Breast Cancer, Brooke Jones is officially Cancer-Free (boobless, but Cancer-Free). These days she spends her time skewering Knuckleheads, Nincompoops and Nimrods (of which there are entirely too many!), with her Camp Meme-A-Day comics. (Facebook.com/CampMemeAday). Jones is also the Creator of CardBard Greetings — the internet’s most ‘twisted’ Greeting Cards. (available at: zazzle.com/thecardoutlet)

Being, as she is, a Breast Cancer Warrior (aka ‘survivor’), Jones donates a portion of EVERY sale of her Greeting Cards and her Memoir, “WHY ARE THERE MONKEYS? (and other questions for God)” to The Breast Cancer Research Foundation.

To learn more (than you ever wanted to know) about Brooke Jones, you are cordially invited to visit her website
where you’ll find a short video (“HerStory”) about her career in radio and comedy; a brief audio sample of her book; her book’s Trailer, and a few other vaguely amusing items. If (for reasons the author cannot begin to fathom) you would like to contact Brooke Jones, there is a Contact Form on her website that has been designed for that very purpose.