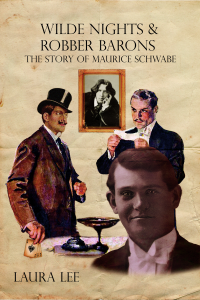 In 2011, a pair of love letters, hidden for more than a century, were discovered uncatalogued in an archive in Sydney, Australia. They were passionate declarations of love from one young man to another. The writer referred to the recipient as his “darling pretty.” He talked about how much he missed him and imagined sending “millions of kisses all over your beautiful body.” He signed off “your loving boy-wife.” The letters were addressed to Maurice Salis-Schwabe. Of much greater interest was who they came from– Oscar Wilde’s lover Lord Alfred Douglas, known to his intimates as Bosie.

Until the discovery, Schwabe had been an obscure figure in the Oscar Wilde story. Although he introduced Wilde to his co-defendant Alfred Taylor, and was, himself, accused of having sexual relations with Wilde, his name was initially concealed, written on a piece of paper instead of being spoken in open court. The testimony made clear, however, that the mysterious “gentleman on the paper” was a catalyst for much of what followed. After Wilde’s first criminal trial ended in a hung jury, the decision of whether or not to re-try him fell on one man, Maurice Schwabe’s uncle, Solicitor General Frank Lockwood, which caused some of Wilde’s supporters to allege a cover up.

But this is just the beginning of Schwabe’s story. In the early 20th Century, Schwabe hosted all-male sex parties for an aristocratic clientele, all the while collecting scandalous secrets that insulated him from prosecution. He spied and cheated on several continents as part of an organized crime syndicate made up of well-dressed, elegant men who adopted false titles of nobility. The false barons made their living traveling around the world on luxury ships, cheating at cards, selling shares in dubious business enterprises, seducing for profit and collecting secrets to be used for blackmail and espionage. They were even suspected of at least one murder. The colorful characters in Schwabe’s orbit were so grand that they seem to have been ripped from the pages of fiction, but it is all true. Hidden for a century in police files, business documents, letters and and articles in many languages in archives on multiple continents, Maurice Schwabe’s story can finally be told.

Author Bio:
My writing draws on a unique background including stints as a morning show DJ, an improvisational comedian, a professional mime, a shopping mall Easter Bunny, and performing various odd tasks the office and non-profit organization of a well-known folksinger.

I come from a family of actors and writers. On my mother's side, my great-grandparents were hoteliers and theater folk. My great-great-aunt and her husband were well-known on the vaudeville circuit, My grandfather was a famous raconteur and his children formed the Jewell Players. My great uncle was one of the creators of the WXYZ radio series The Lone Ranger and The Green Hornet. My grandmother was a radio actress who played Miss Case in the latter series. I believed I was destined to be an actor, but my late father new better.

My dad was a writer, and he encouraged me to try writing. Thus my professional writing career began at the age of 12, when I published "My first Day of Junior High School" in a magazine. There was a long pause between my first and second publication.

I went on to earn a theater degree from Oakland University. I wrote and performed with the Vorpmi comedy troupe, and authored a one act comedy "Humphrey Hall," which was performed to glowing reviews. (Tests for radioactivity came back negative.) After graduation, despite many lucrative offers from large theater corporations, I traveled to England and Scotland with a work visa. There I learned, among other things, how to wash dishes, and how to build up a large debt, a skill I have retained to this day. Upon my return, I embarked on a broadcasting career. More than one station was so impressed by my performance that they decided to just close the place down after I left.

Writing radio commercials and occasional copy for local papers eventually led me to the realization that dad was right and I began my writing career. I became a regular contributor to the Times Union in Albany and a corporate speech writer with OverViews Speechwriting. I have written for such magazines as Reader’s Digest, Private Pilot, The Futurist, Smithsonian, Weatherwise, Preservation and Seattle Magazine. I have written 21 books including biography, fiction, non-fiction and children's literature. Highlights include Oscar's Ghost by Amberley Publishing, Blame it on the Rain by Harper Collins and The Pocket Encyclopedia of Aggravation by Black Dog and Leventhal. When global pandemics and wars permit, I divide my time equally between writing and doing ballet master class tours with my partner, the artistic director of the Russian National Ballet Foundation. I live in Rochester Hills, Michigan.