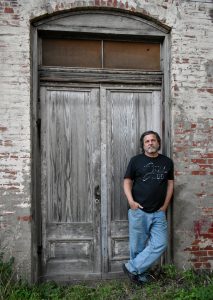 Interview With Author Will Holcomb

Tell us about yourself and how many books you have written.
I came late to writing. I didn’t start writing until I was 45. It was never something I planned on doing, or even thought about doing. One day, on my hour and forty-five minute commute, I was listening to an audiobook that gave me a story idea. My sister is a writer, so I called her up to give her the book idea. She loved the idea, but said she couldn’t write it. She said if I gave her an outline she could write it from that. Even in college, if I had to turn in an outline, I wrote the whole paper first and created an outline from that. So, I started writing. I wrote for about six months and gave my sister a rough draft of the completed story. It logically divided into four parts so we spent two years rewriting and editing the first part.

Then … we put it out into the world. It was a scary time thing to do. I mean, I wasn’t a writer. Who was I to think people would want to read what I have to say? Then the first review came in and it was 5-stars with glowing praise, comparing it to two of the biggest names in the genre. Then more 5-star reviews and more. So, my sister and I started editing part 2. It was a huge effort but when it was done, the audience loved it. The same with part 3, and I am currently working on part 4.

After I wrote the first draft, I learned something about myself I never realized before. I always had stories running through my head. For as long as I remember I was annoyed by stories in my head and would try to ignore them. Eventually they would go away only to have another story start forming. After I wrote that first draft, I started paying attention to the story and letting it form. One weekend, I wrote the current story in my head down. I have been involved in theater for many years so I decided to write it as a play. Over that weekend I wrote “Clinically Un-Depressed”. That show has been produced about ten times now and sells out almost every time. People love it so much they bring others back to see it.

I didn’t start writing until I was 45, and never planned on being a writer. With three published books, three produced plays, currently writing the forth part of series, my forth play scheduled for next fall, the start of five other books, I discovered I don’t want to be a writer, I am a writer.

What is the name of your latest book and what inspired it?
My series “The Infinite Jeff: A Parable of Change” started forming after listening to “Flatland: A Romance of Many Dimensions” by Edwin Abbott Abbot, published in 1884. Flatland gave me the idea of a being from the forth dimension visiting the third dimensional world. How would he see the world and how would he explain things? The Infinite Jeff was born from that idea. The book is vague about exactly what Jeff is and where he comes from, but that idea is what started me writing.

Do you have any unusual writing habits?
One piece of advice I hear writers give other writers is “write everyday”. To me, that sounds like hell. I don’t want to be a writer. I am a writer. I write when I have ideas in my head I need to empty out. I have articles on Medium.com which are simply there to empty my head of ideas that are taking up too much space. I write the article and it frees up space in my head. When I don’t feel called to write, I don’t write. I just enjoy the break.

What authors, or books have influenced you?
For most of my life, I wasn’t a reader. When I was about twenty, I read Richard Bach’s “Illusions: Adventures of a Reluctant Messiah” for a college class, and wall in my brain exploded. That opened up a part of my brain I had never used before and I became a reader.

Because I wasn’t a reader earlier in life, I’m a very slow reader. With a world full of books and the amount of work it takes me to read one, I rarely read books twice. “Zen and the Art of Motorcycle Maintenance” by Robert Pirsig was a difficult book for me to read but it never left me. I knew there was so much I missed while reading it. When I read it the second time, it was so much more than the first time. I’ll be reading it again someday.

I also have a rock opera, “An Unsafe Place: A Love Story” with 20 original songs that will be produced next season at a local theater.

What is your best method or website when it comes to promoting your books?
Goodreads is where most of my readers come from. “The Infinite Jeff” is #1 on their Best Spiritual Fiction list and that has helped readers find my work.

Do you have any advice for new authors?
When I get asked for advice I always say, “Be willing to suck.” I can’t read the rough draft I handed my sister because the writing is so bad. I was always amazed my sister put the effort into helping me. I asked her about it later and she said, “I can teach someone to write, I can’t teach someone to be a storyteller. When I read that, it was clear you were a storyteller.”

Learning any skill goes from being bad at it, practice, improving, and then proficiency. If you throw your hand up and give up because your first attempts suck, you’ve stolen your future from yourself.

What is the best advice you have ever heard?
Write the book you want to read.

You have to be your #1 audience. If you are writing to please someone else, give up now. It isn’t art. “The practice of offering oneself or using one’s talents for an unworthy purpose, especially for personal gain” is one of the definitions of prostitution in dictionary.com.

What are you reading now?
I just finished “I Wanted More Than This” by Carrie Ann Paulo. She’s a local author. One thing I try to do is read books by authors I know. I want people to read my work, so I figure it’s only right I read their work.

I’m currently working on “I’m Okay, You’re Okay” by Thomas A. Harris and “The Power of Now” by Eckhart Tolle

What’s next for you as a writer?
Part 4! It’s haunting me.

I have the start of plenty of books and plays but right now … part 4.

If you were going to be stranded on a desert island and allowed to take 3 or 4 books with you what books would you bring?
I have a stack of books that I don’t want to start until I have time to focus on them. A desert island would be great.
• Critical Path – R. Buckminster Fuller
• Tertium Organum – P. D. Ouspensky
• The Brothers Karamazov – Fyodor Dostoyevsky
• And I would probably like the time to read Zen and the Art of Motorcycle Maintenance again

Will Holcomb Author Profile on Smashwords