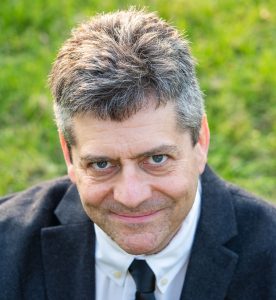 Tell us about yourself and how many books you have written.
I created the Bolingbrook Babbler back in 1998 as a work of web fiction, and today I write for Freethought Blogs, and I’ve been active in progressive politics and organized secularism for decades.

I got my start in professional fiction writing as a contributor for White Wolf Studio’s Demon: The Fallen game line. After working on the Babbler for several years, I decided to self-publish books inspired by the setting of the Bolingbrook Babbler stories on my website.

My self-published Books:
Pathways to Bolingbrook (Free to newsletter subscribers)
The Rift (Releases 7/13/22)

What is the name of your latest book and what inspired it?
The Rift: A Bolingbrook Babbler Story. It was inspired by a rift within the secular movement between the libertarian/anti-feminists and progressives/feminists. As in the book, things exploded when a female podcaster mentioned that a man hit on her in an elevator at 2 AM, and she merely asked her followers not to do that. The incident itself wasn’t a big deal, but I was stunned by the backlash against the podcaster. She started receiving death threats, while at the same time, most of the movement’s leaders downplayed harassment, and seemed more concerned with protecting the reputations of questionable male figures, like Lawrance Kruss.

I watched as my progressive friends were hurt by the hatred directed at them. That compelled to write The Rift in response. Sadly, the harassment tactics used against women and progressives were later used in Gamergame and by the Alt-right.

Do you have any unusual writing habits?
Sometimes I’ll check the Bolingbrook, IL government sites for ideas.

What authors, or books have influenced you?
William Gibson, Stephen King, Bruce Sterling, and the Spenser books.

I really like the idea of stories where all the characters can’t see the big picture, and that’s a major theme in the Bolingbrook Babbler books.

What are you working on now?
After releasing The Rift, I will start work on the next book, Phantoms of Bolingbrook. I also plan on releasing a collection of early Bolingbrook Babbler web posts.

What is your best method or website when it comes to promoting your books?
Ask me next year.

Do you have any advice for new authors?
Everyone needs an editor and/or someone to shoot ideas off of.

What is the best advice you have ever heard?
Even if you’re doing satire, if you’re using a real person as a character, make sure their actions fit their personality. Otherwise, it won’t be funny/believable.

What are you reading now?
Cloud Cuckoo Land

What’s next for you as a writer?
Trying to finish the Bolingbrook Babbler Stories in my lifetime.

If you were going to be stranded on a desert island and allowed to take 3 or 4 books with you what books would you bring?
A book on survival, and William Gibson’s Bridge Trilogy.