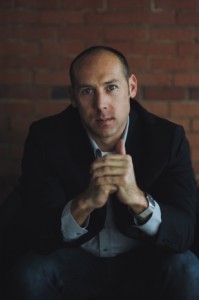 Tell us about yourself and how many books you have written.
Howdy! The GAIAD is my first published novel, though like many authors I’ve been writing for a while, and even took a year off school when I was 19 to work on an early (very precocious) novel, which I actually finished. But I realized that the old adage “write what you know” is absolutely true, and at 19 I didn’t know much. A few years in a pretty cut-throat finance job and then in law enforcement as a cop solved that problem quickly. I write science fiction, but don’t limit myself to the standard box of the genre. My editor described The GAIAD as ‘surprisingly literary.’

What is the name of your latest book and what inspired it?
The name of the latest book is The GAIAD. This is a good story, actually. I hint at this in other places, and I plan on putting the story out there in a more substantive way, but at the time I was traveling the country in a solar-powered RV. I was camped outside of the San Rafael Swell in Southern Utah, about two hours west of Moab. The location is beautiful, almost untouched and always pretty sparsely visited. It was early November.

One day I was hiking around the face of this pretty substantial cliff. It was gorgeous, the sun low in the sky, the light red-golden. I was pretty far from an established trail in this amazing little area that reminded me of some naturally sculpted zen garden. The rocks were formed and smoothed by wind and rain, the junipers and other little bushes stunted and colorful, the shadows long and dark in the fading light. In the middle of nowhere, really, I came upon a stack of rocks, a cairn placed in a very inconspicuous spot. I thought to myself, “What could this mean?” And realized that it could have been there for a year, or a few thousand. It didn’t mark a trail, nor anything else obvious and really the only conclusion was that its message was simple, as simple a communication as there can be. “I was here. I existed. I was. I am.”

This realization triggered a cascade of thoughts and concepts that led to the ultimate premise behind the book.

Do you have any unusual writing habits?
You hear a lot about how “so and so successful writer” was such a professional that he woke up every morning, dressed in a suit and tie, and pretended he was going into an actual office everyday. I’m in the most comfortable clothes possible (possibly my underwear), with a steaming cup of coffee in front of me. (I wouldn’t want to spill it on my suit)

What authors, or books have influenced you?
The greats of scifi. The classics. And quite a few old spiritual works as well. I have like 5 copies of the Tao Te Ching lying around my home.

What are you working on now?
The sequel to The GAIAD, and the next title in the “LOGOS Series,” of which The GAIAD is the first.

What is your best method or website when it comes to promoting your books?
Despite the global, mass, expansive nature of the Internet, that personal connection is still invaluable. Seriously, please feel free to “personally connect!”

Do you have any advice for new authors?
Know thyself. Know the other. Endeavor to learn as much about life, about humanity, about people. When you see something ugly, either within yourself or out, don’t look away. Look it square in the eye.

What is the best advice you have ever heard?
“Do your work and then let go; the only path to serenity.”

What are you reading now?
Tractatus Logico-Philosophicus by Ludwig Wittgenstein. The Revenant by Michael Punke.

What’s next for you as a writer?
More writing! Film?