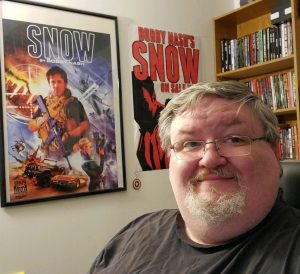 Tell us about yourself and how many books you have written.
Hi. I’m Bobby Nash. I am an award-winning author, an artist, and an occasional actor. At last count, I have 149 published stories and there are more in the pipeline for 2021 and beyond. Here’s my bio with a few titles sprinkled in for good measure.

For more information on Bobby Nash please visit him at www.bobbynash.com, www.ben-books.com, and across social media.

What is the name of your latest book and what inspired it?
My latest release is called IN THE WIND – A Tom Myers Mystery. Tom Myers is the sheriff of Sommersville County, Georgia. Although this is the first book in the series, Tom Myers and his deputies have appeared in two published novels, EVIL WAYS and DEADLY GAMES! and will also appear in the upcoming EVIL INTENT novel in 2021. Myers solo adventures will continue in 2021. I’ve already started plotting book 2. Fans of Justified and Longmire will probably enjoy Tom Myers series.

Here’s the retail book synopsis:
A safehouse ablaze.
4 dead federal agents.
A missing federal witness.
2 wounded agents clinging to life.
Another day at the office for Sheriff Tom Myers.
When a secret joint FBI/US Marshal safehouse in Sommersville, Georgia is attacked, federal witness Bates Hewell flees custody in the confusion and heads for the hills. The authorities descend on the county in search of their prize witness, convinced that he is hiding out in the wilds of Sommersville County. Can local sheriff, Tom Myers find him and bring him in before a band of hired killers do? Tom Myers’ story began in EVIL WAYS and continued in DEADLY GAMES! but the Sommersville sheriff’s adventures are far from over. Sheriff Tom Myers returns in IN THE WIND, the first in a new series of mystery thrillers from award-winning author Bobby Nash and BEN Books. Fans of Justified and Longmire will find a lot to love in this series.

You can find In The Wind – A Tom Myers Mystery here: https://www.amazon.com/Wind-Tom-Myers-Mystery/dp/B08DPQZZH9
Available in paperback and ebook. Audio in production.

Do you have any unusual writing habits?
My writing habits are probably pretty normal. I start my day doing everything I can to keep myself from getting started, procrastinating like a champ until I make myself get started. My average day gets broken up into sections. I do promotion work, writing, admin work, then back to writing, and then more promotion. Then I get up the next day and do it all again.

What authors, or books have influenced you?
Oh, there are so many. I have learned a lot from other authors, not just in terms of writing and crafting story, but in character creation, promotion ideas, social media do’s and don’ts, and how to interact with readers, other authors, publishers, and media. I have often been inspired by the kindness, the generosity, and the attitude of other authors. I won’t name names because that would become a very lengthy list.

What are you working on now?
I’m always juggling multiple projects and today is no different. As I type this on November 10th, I am currently working on SNOW DOWN, book 6 in the Snow series for BEN Books, working on HUNTER HOUSTN: HORROR HUNTER book 3 (of 4) for Falstaff Books, prepping a short story for Flinch Books, working on EVIL INTENT’s second draft for BEN Books, and doing two serialized novels on Patreon (www.patreon.com/bobbynash). Plus, the usual promotional odds ‘n ends and doing plots for upcoming stories.

What is your best method or website when it comes to promoting your books?
It’s hard to say because it seems to change from book to book. Sometimes social media connects, other times it’s paid ads, other times it depends on how the wind blows. I try different avenues to see what works for me and what doesn’t. I just bought my first ad here on this site. We’ll see how it goes. Fingers crossed.

Do you have any advice for new authors?
New authors, take a moment and decide what you want to achieve with your writing. Make goals, both short and long term. Work to those goals and celebrate them when you accomplish them. There are many different paths in writing. You can write as your career or as a hobby, fulltime or part time. No one way is right for everyone. Decide which path works best for you and tailor your plan accordingly.

As an aside, if you want to write as a career then you have to treat writing as a job. That means you are working every day, whether you feel like it or not. You can’t wait for the muse to strike as a fulltime professional author.

What is the best advice you have ever heard?
The best advice I ever received was to learn how to promote my own work. As it was told to me, “Who cares about your book more than you?” That advice stuck with me and I started learning all I could about promotion.

What are you reading now?
I just started The Head of Mimir by Richard Lee Byers. It’s a tale of Heimdall and Sif from the Thor books.

What’s next for you as a writer?
More writing. There’s always more writing to do. For 2021, I have plans for more Snow books, including something we’re calling Snow Shorts. More on that in January. There will also be more Tom Myers mysteries, more Lance Star: Sky Ranger adventures, and more tales of The Freelancer. In addition, Evil Intent will debut as will the Hunter Houston: Horror Hunter series (4 books). There’s also plans for a sequel to Deadly Games! called Deadly Deals! Beyond that, I have some ideas and am talking with some publishers about projects.

If you were going to be stranded on a desert island and allowed to take 3 or 4 books with you what books would you bring?
Now that’s tough. The John Byrne Fantastic Four omnibus, one of Michael Connelly’s Harry Bosch novels, Robinson Crusoe (for advice on how to survive on said island), and a book on boat building. 🙂