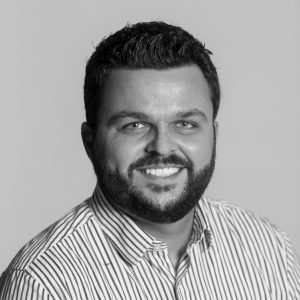 Tell us about yourself and how many books you have written.
My name is Brent Jones, and I write fiction full-time from Fort Erie, Canada. I’m married, I’ve got two awesome-sauce dogs, and I love bicycles, guitars, tattoos, beer, coffee, and road trips. I self-published my first two novels back in 2017, The Fifteenth of June and Fender, as well as several short stories. This year, I am releasing a four-part series of thrillers, known as The Afton Morrison Series.

What is the name of your latest book and what inspired it?
My latest book, released June 25, 2018, is called Go Home, Afton. It’s the first of four parts in a serial thriller, about a small-town children’s librarian turned disturbed vigilante murderess by night. I first thought of the idea while watching a rerun of Forensic Files. I wondered to myself, what would the perfect murder look like? And who, in a small town, would be the last person suspected of murder?

Do you have any unusual writing habits?
I almost always write to an instrumental soundtrack. I often like to write outdoors, too, but I don’t think either of those two habits are overly unusual.

What authors, or books have influenced you?
I’m a fan of authors who can craft flawed protagonists that we can relate to and feel for. Learn from, even. A few examples that come to mind include Mordecai Richler, Nelly Arcan, and Douglas Coupland, all three of which happen to be Canadian.

What are you working on now?
The Afton Morrison Series will be released in 2018 in four parts: Go Home, Afton (June 25), See You Soon, Afton (August 7), Nice Try, Afton (September 17), and Time’s Up, Afton (October 29). Thereafter, the entire series will be released as one collection in print, audio, and eBook formats. At the moment, I’m putting the finishing touches on book four and coordinating with Kristin James (KJ the Voice Actor) to complete the audiobook ahead of schedule.

What is your best method or website when it comes to promoting your books?
That’s a great question. I don’t know that I have one website or method that stands out above the rest. I know in-person author events, often at libraries, tend to result in the sale of a large number of paperbacks. Pay-per-click ad campaigns via Amazon Marketing Services tend to work well, too. A lot of initial reviews my new titles receive come from my own email list, as well as working with book tour services, such as Shannon O’Sullivan over at rrbooktours.com.

Do you have any advice for new authors?
Yeah, write, and write often. The more we write, the better we get it at. The more we publish, the more we learn, and the better our odds become of connecting with new readers. Be fearless. Writing (not to mention publishing) can be scary stuff, not to mention difficult, but you never know what will come of it unless you try.

What are you reading now?
I just finished Born a Crime by Trevor Noah, and now I get to choose from the stack (next to my desk) what to read next. It’s a toss-up between The Smallest Thing by Lisa Manterfield, The Butcher by Jennifer Hillier, and Casket Cache by Janice J. Richardson.

What’s next for you as a writer?
You mean aside from selling millions of books, becoming a household name, and retiring on some private tropical island? I’m kidding, of course. The honest answer is, I don’t know. Follow my own advice, I guess, and write, write, write some more.

If you were going to be stranded on a desert island and allowed to take 3 or 4 books with you what books would you bring?
That’s a great question. The Help by Kathryn Stockett, perhaps. I read that book a couple years ago, and I still find myself thinking about it to this day. Misery by Stephen King, only because I’ve always meant to read it, and yet it sits on my bookshelf, collecting dust. And since you used the word “stranded” in your question, I’m going to pick one of my own books. The Fifteenth of June, since it was my first completed novel. It isn’t the strongest of my published titles by any means, but it does serve as a reminder that every journey has to begin somewhere. And that’s just the kind of reminder I’d probably need stranded somewhere remote.