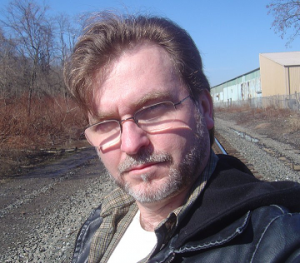 Tell us about yourself and how many books you have written.
I am a 53 year-old grandfather living in Ohio. I’ve written a mystery series which is presently five books deep with more on the way. The introductory book is available free in electronic format and the other four books were just put out in a box set which is currently enrolled in Select, so it’s free to Prime members. I also have a noir collection, a graphic novel, several novellas and a non-fiction offering available. Most are available in both paperback as well as digitally in wide distribution.

What is the name of your latest book and what inspired it?
My latest release is called 8 Tales of Noir, a collection of short pulp-style and other darker or crime stories. Six of the short stories from the collection were written for my podcast. It’s called The Thrills and Mystery podcast, and on it I read short suspenseful stories by myself as well as other indie writers.

Do you have any unusual writing habits?
I like to write when the house is either otherwise empty or when everyone else is asleep. I’m kind of a night owl. Also, I tend to write something, then leave it for a while to germinate in my head, then I come back to it and edit in a frenzy. I treat my ideas for stories in a similar fashion. I don’t begin writing a story as soon as i think of it. i wait a while and if the story doesn’t fade from my mind, then i know I can be passionate enough about it to actually write it.

What authors, or books have influenced you?
I love Kurt Vonnegut, Dan Brown, Rex Stout, Mark Twain, and Lewis Carroll. Books that have influenced me include The Big Sleep, A Clockwork Orange, and All About Jeeves.

What are you working on now?
I’m working on the sixth installment in my mystery canon. Like the third book in the series, it’s going to be a collection of three novellas. I do this because the series is pastiche of the Nero Wolfe novels which was itself pastiche of the Sherlock Holmes series. Both of those series were made up of full-length novels and shorter works, so I’m carrying on that tradition.

What is your best method or website when it comes to promoting your books?
I’m really bad at self-promotion, so my advice in this department isn’t worth a heck of a lot. I have tried blogging, guest-blogging, interviews, podcasting, … you name it. I’ve done book give-aways, countdown deals, writing for anthologies, really everything in my power short of paying for ads which I have no budget for. All with limited success. I mean, sure I have some sales from all of these endeavors, but nowhere near as many as I’d like.

What is the best advice you have ever heard?
Make the first book in a series free as soon as possible.

What are you reading now?
I just picked up The Martian and I’m also reading over the manuscript of a friend who has written several books in other genres, but asked me to read over his first mystery to offer any advice I might have to improve the story.

What’s next for you as a writer?
I actually just instigated a project with several other genre writers. We’re going to create a character who we can all write unique stories about. Then we’ll collaborate on a prequel giving that character’s backstory. Eventually we’ll offer the character under creative commons license so that other authors are free to use her. Our hope is that readers who like the character will follow her from story to story discovering new authors along the way.

If you were going to be stranded on a desert island and allowed to take 3 or 4 books with you what books would you bring?
Alice in Wonderland, The DaVinci Code, and Gambit.