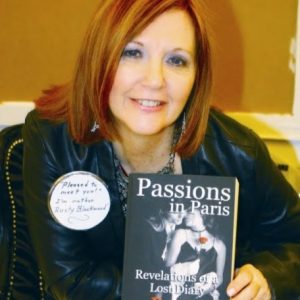 Tell us about yourself and how many books you have written.
I grew up during the 1950’s on my paternal grandfathers farm in rural south-western Ontario, Canada. My loving parents are both gone now, and I miss them everyday, but I still have my brother. I am Mom to two wonderful sons, and loving grandmother to three beautiful granddaughters, and one handsome grandson. I am also great grandmother – or G-G – as I am known to my delightful great grandson. I have always loved to write. This adoration for English composition began in grade school and carried into my adult years. Though I am unprofessionally trained in the field of writing, I have always possessed the uncanny ability of unique expression in stories that could grasp the heart and soul of the reader. I am an Interior Decorator by trade, and owned and operated a residential home service for twenty eight years before retiring from that field. My writing venture began in 2001 when I became a serious writer with intent on seeing where it could possibly take me. Over the years I had written an assortment of both contemporary and traditional poetry, and from this I put together my first collection under the title, Feelings: A Rhythmic Journey in Thought which I self-published in 2009. This was followed in 2010 with my first collection of children’s short stories, entitled, Young Minds. This collection was based on my own childhood as well as stories I wrote for my grandchildren. In 2010 I published the first part of the original two-part Passion in Paris that I began writing in 2001. This two-part romantic fiction drama was short lived, and it was also not the way I had envisioned my first venture into this genre to be nor the publishing of it, and because of this, the end result was inept, so I took it off market it until I could revise it into my original concept, that of which I finally brought to fruition in the 818 page, 4-star-Amazon awarded, romantic fiction grand scale novel, Passions in Paris: Revelations of a Lost Diary, which I released in 2013. Leading up to this, I published a new poetry collection entitled, Impressions which I released in 2011. I followed this with a revised children’s short story collection, containing previously published stories, including those written for my grandchildren plus additional new stories, under the title, Through the Eyes of Innocence. This was followed in 2012 by the comedy short, The Misadventures of Derwood Tugbottom. This was followed in 2015 by the 5-star-awarded romantic fiction drama, Willow’s Walk. In 2017, I following that novel with the second in the Derwood Tugbottom comedy series, entitled, Derwood Returns. The early titles, Feelings, Young Minds, and the two-part Passion in Paris: Connections and Directions respectfully, are no longer available. The rest can be obtained at all Amazons, as well as other fine online bookstores, and brick and mortar order desks everywhere. The Perils of Autumn, and Derwood Goes Caribbean are soon to be released. I hope everyone will watch for them, as well as check out the available titles I mentioned.

What is the name of your latest book and what inspired it?
The Perils of Autumn. I have always adored horses, and admired nurses. I find the horse a most intelligent animal – if not the most intelligent, at least in my opinion – and I always loved to watch them, speak with them, and applaud their wonderful movements. I loved to ride in my youth, even had my own pony as a girl, however I never rode professionally, or entered show competitions, but I would take in as many as I could. I have always held immense respect for nurses, and the dedication they possess when it comes to healing those whom are ailing, recuperating from surgery or an accident, and it is all done with expert care and compassion. Because of the admiration for these two subjects, I decided to combine them in a story that centers around both.

Do you have any unusual writing habits?
I’m not exactly sure what ‘unusual’ means in this question. However, I do like to scribble ideas and dialogue in a notebook that I keep for ideas for future projects. My desk is always littered with small notes pertaining to whatever I’m working on at the moment. I used to write in the evening often well into the night, but since retiring from my business I now apply, and have for a while now, the day hours that I once worked to my writing. However, it can often be distracting and annoying when the phone rings, a dog continually barks outside, or the usual noise throughout the house as well as outside that carries in.

What authors, or books have influenced you?
I have great appreciation and respect for a few authors who are primarily known as authors of children’s books, and they are Canadian authoress, Lucy Maude Montgomery ( Anne of Green Gables, plus the Emily of New Moon series and more) British author Anna Sewell (Black Beauty) and American author Laura Ingalls Wilder (Little House on the Prairie series of books). I also enjoy the workings of Mark Twain (Tom Sawyer & Huckleberry Finn, both classics). Fav authors of adult work are: Nora Roberts, Kathryn Stockett (The Help), Stephen King ( numerous horror & psychological thrillers) and British authoress, Emile Bronte (Wuthering Heights). I also enjoy the work of fellow Niagara author, Gina IaFrate. There are many talented, self-published, local authors in your area; check them out, and give them a read. You might find yourself pleasantly entertained.

What are you working on now?
I am currently finishing the third installment of my Derwood Tugbottom comedy series, entitled, Derwood Goes Caribbean. Each book in this series takes the bumbling, retired London England City Hall Official, on another eccentric adventure, where he is sure to tickle your funny-bone with his hysterical antics. In the latest, he, and his best friend, Scotsman Robert McEwen, board The Travelling Minstrel as it sets course for the Caribbean with a ship full of singles looking for a good time.
I have also began work on the follow-up novel to The Perils of Autumn, entitled, Return to Autumn. This second part of the ongoing story introduces readers to a few new characters, solves a deep secret and brings it out into the open, and carries the reader to the end of this touching, and not-soon-forgotten story.

What is your best method or website when it comes to promoting your books?
I use all social media platforms: Facebook, Twitter, Linkedin, Pinterrest, Goodreads, Google+, Authors.com, as well as my official website www.rusty-blackwood.com, where readers may find assorted information about me, my work, my titles, and keep caught up with me through my Journal/Blog. I also write a monthly, end of month Newsletter that carries my news of the month, whatever that may be. It’s a great way to keep engaged with readers on my contact list, and them with me. I have worked with my stellar marketing rep & publicist, Don McCauley, since 2011, who looks after me well and also keeps my name before the public eye. That is most important, for if you are out of sight, you are out of mind. I also work with Joe Crawford, of the Niagara based The Joe Show on the TJSN Network, and I have recently began working with Catherine Townsend-Lyon of Lyon Media Services, beginning with the promotion of the soon to be released, Readers Favorite 5-star-award-winning, romantic fiction drama, The Perils of Autumn.

Do you have any advice for new authors?
Write what you know. There is nothing more discouraging or upsetting than to undertake a subject in written words that you know little about, and make it entertaining and legible to the reader. Often writers draw from life experiences, I do, for there is no better research than what you have experienced first hand. But when you are very young, you have yet to have much experience to draw from, therefore research everything thoroughly. I believe this suggestion could be taken by any writer, seasoned or not, but if you write about things you know about, you will find your finished piece a polished, fine offering for the eyes of any reader that chooses your title. Critique is a large portion of writing; it is not always kind, and you must learn to take what you can from that and apply it to your craft. Do not expect that your first, even second or third title will be an instant success. It may or may not happen, but if you love to write, have a passion to write, then you will find a way to stick with it. It can be a very long, drawn out process. Finally, do not let anyone tell you it cannot be done. Only you know the muse inside you, so let it speak to you, and have fun.

What is the best advice you have ever heard?
Pretty much what I said in the prior question. Things take time, they rarely happen over night, and if you go into this field with expectations that you put out a book and you are an instant celebrity with gold untold, then you may be badly disappointed. It may happen, there is nothing saying it won’t, but keep an open mind, and approach realistically.

What are you reading now?
Bestowed With Love And Splendor by Niagara author, Gina IaFrate. It is a wonderful story of a degraded-by-her-husband woman who finds herself in a heartbreaking, mentally abusive marriage. The heroine, an agent for a Niagara travel agency, is sent to the Island of Sardinia to assist their associate agency in setting up new programs for tourists. While there, she encounters the possibly of a life she could only dream about should she choose to remain in her present, loveless marriage, and proceeds to struggle with a life that could be hers for the taking.

What’s next for you as a writer?
I am currently working on the 3rd installment of the Derwood Tugbottom comedy series, Derwood Goes Caribbean, and I will also be doing a 4th installment in the series, possibly the last, but that is still not decided, and I have started the follow-up novel to The Perils of Autumn, entitled Return to Autumn. This novel will carry readers to the end of this intense story. I am also planning a final poetry collection. I have written a huge array of contemporary and traditional poetry over the years, and I hope to compile them in a final collection. I have also started a historical account of my family’s country music band, The Midnight Ramblers, entitled Ramblin’ Years: The Midnight Ramblers: A Biographical Account. I joined this band in 1963 at age 13 as a vocalist. I also learned to play acoustic guitar, and bass guitar, which I played from 1970 until the group ended in the mid-seventies.

If you were going to be stranded on a desert island and allowed to take 3 or 4 books with you what books would you bring?
Gone With the Wind, a map of the area, The Bible, and a photograph album of my family.